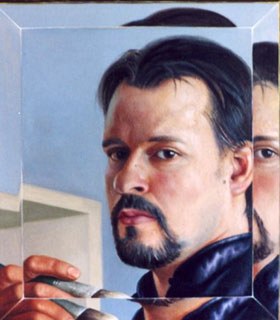 "In figurative work, I have to put my soul, my heart, everything into it."
-Valeriy Belenikin

A Moscow native now living in Lambertville, NJ, Valeriy Belenikin is a a graduate of the Moscow Academic Institute of Fine Arts. Belenikin draws inspiration for his paintings from classical literature and fairy tales, relying heavily on allegory. His humorous, sometimes biting observations of the human condition peer behind the elaborate facades people construct to hide their weaknesses. His hyper-realistic oil paintings include elaborate compositions of objects and people, as well as finely drawn portraits.

After relocating to New Hope from New York in 2002, Belenikin presently has his own art gallery in Lambertville, New Jersey.

Belenikin's paintings can be found in many Moscow public buildings as well as in cultural centers in Moscow, St. Petersburg, Vienna, and Melbourne.

His works were included in the Michener Art Museum exhibit entitled The Contemporary Eye in 2005.

Teachers and Influences
Belenikin admires the work of Goya and Rembrant, as well as the contemporary Norwegian artist, Odd Nerdrum.

Connection to Bucks County
Valeriy Belenikin moved with his wife from New York to New Hope in 2002 and opened the Belenikin Fine Art Gallery. A year later, he moved his gallery to Lambertville, New Jersey.

To preserve the 2003 Miles of Mules Project (a project of the Delaware and Lehigh National Heritage Corridor), Belenikin rendered 74 paintings of the 174 fiberglass mules. He showcased the paintings in his gallery in Lambertville.

Belenikin's mural, Redemption, was commissioned by the New Hope restaurant, Marsha Brown. The mural, measuring approximately 40 x 20 feet, is in keeping with the building, a converted church, and portrays St. George hunting lions. Belenikin worked on the mural seven days a week over a five month span in 2003.

Major Collections
Valeriy Belenikin's paintings can be found in many Moscow public buildings as well as in municipal and private collections throughout the world. His works are housed in public buildings and cultural centers in Moscow, St. Petersburg, Vienna and Melbourne. Additionally, Belenikin's art is featured in public foundations including the ING Bank, Vienna and Paris; the Russian Cultural Center, Moscow; and the Gallery Mars, Moscow. His work is also in the collections of Steven Witkoff and Jani Forbosi. Finally, Belenikin's work is part of many private and corporate collections throughout the world including Russia, France, Germany, USA, Italy, Japan, Belgium, Argentina, Syria, Australia, Holland, Sweden, Switzerland, and Greece.

Russian in the West