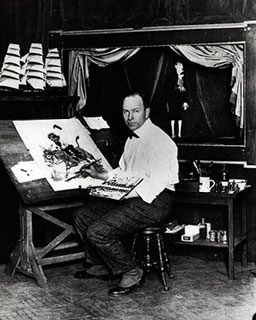 Tony Sarg was know as a children's book illustrator and for reviving the marionette theater in the United States. As a young man, Tony Sarg's father wanted his son to pursue a military career. At the age of seventeen, Sarg was commissioned as a lieutenant in the horse artillery of the German army. He loved to draw, and left Germany to live in England when he was twenty-three years old.

In London, he worked for an ad agency and designed the famous lion trademark for Lyon's Marmalade. He left the ad agency to draw for magazines, illustrating old jokes from newspaper files.

After watching fifty performances by the great puppet master, Holden, in London, Sarg made some marionettes and established his own theater at the Old Curiosity Shop. He came to the United States in 1915 to illustrate books and design barber shops for children in department stores. Touring with marionettes in the 1920s made him famous.

In the story books, Sarg devised animal characters and sometimes created memorable parts to entertain and educate children. Some books explored history in a humorous way and included instructions for making toys. Sarg went on to design jigsaw puzzles and musical blocks. He was responsible for developing the flying helium character balloons used in the Macy's Thanksgiving Day Parades.

Sarg had children's shops in New York and Nantucket, as well as in New Hope, Pennsylvania, where he sold his own textiles, wallpapers, rugs and furniture. The renowned "Nantucket Sea Monster," which showed up on the children's beach in Nantucket in the 1930s was also a Tony Sarg creation.

Education and Training
Lichterfelde, a German Military Academy, 1896
Self taught as an artist