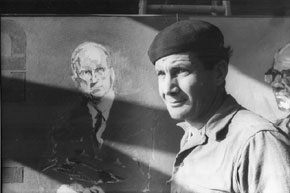 Mixed-media painter Stirling Spadea, born Alexander Stirling Spadea in 1927, moved to Bucks County in 1935 when, according to the artist, the Spadeas managed to put together enough money to buy gas for a six hour drive. Three hours later, they arrived in Bucks County and bought a family plot. Living in the greater Bucks County area meant that Stirling was surrounded by his mother, Joan Miller Spadea, noted fashion designer, and her artist friends. In an interview, Spadea remembers, "I grew up at [my mothers] easel. I think I learned a lot by osmosis. As a child I was always doodling." He would attend night classes at Columbia University, but the only time he ever formally studied art was when he attended classes at the Art Students League in New York City for three weeks, where his mother was a faculty member.

Following high school graduation, Spadea entered the army, served in World War II, and was then recalled into the Korean War, according to a local Bucks County newspaper. While in service, Spadea discovered a love of painting, particularly portraits. When he ultimately left the army and came home to settle with his wife in Pipersville, Pennsylvania, Spadea began to paint regularly. He was never able to solely work as a painter and had to take many other jobs, including working in a position for the Bucks County Department of Corrections.

Spadea did not covet fame or fortune. Instead, he was content to paint when he could and aspired to be comfortable rather than wealthy or well-known.

Spadea gained a great deal of recognition, as well as commissions, due to his self-described instinctive style while painting with oil on Masonite, oil on canvas, watercolors, or drawing with charcoal or pastels, or any combination thereof. His loose brushwork and playful use of color can be found in his portraits of United States Ambassador Llewellyn Thompson, architect Edward Durrell Stone, Bucks County author James A. Michener, newspaper publisher Sir Cecil King, fashion designer Bill Blass, artist Malcolm Morley, and the Duke of Windsor. Though Spadea considered people-painting to be his big bit, he was also well known for paintings of interiors, street scenes, barns, houses, nudes, and landscapes. At times, some of his work took on a political or satirical tone, as in Spadeas Political Statement of Fascism.

Spadea's work has been exhibited widely in venues such as the Art Alliance in Philadelphia, Phillips' Mill Annual Juried Art Exhibition in New Hope, the Rodman House in Doylestown, the Coryell Gallery in Lambertville, the Richard Stuart Gallery in Pineville, the Tinicum Arts Festival, the Janet Nessler Gallery in New York, and the Portal Gallery in London. His portraits of James A. Michener in both abstracted and formal styles are in the Smithsonian Institution's National Portrait Gallery as well as the Blanton Museum of Art at the University of Texas at Austin. In addition to his paintings, he was also known for writing a children's book titled The Magic Fingers under the pen name Bruce MacCrimmon. Five of Spadea's paintings are in the Michener Art Museum's permanent collection. A collection of Spadea's personal slides are housed in the James A. Michener Art Museums archives.

Spadea's mother, Joan, and sister, Anne, were active artists within Bucks County. Joan Miller Spadea was a fashion illustrator and innovator who developed poseable lifelike mannequins, created a series of clothing patterns, worked with Bonwit Teller and Saks Fifth Avenue, and had a syndicated newspaper column on fashion. Anne Spadea Darrow Combs (1928-2018) was a painter and sculptor active within Bucks County. Stirling's other sister, Sara Spadea Black, is an artist who currently resides in Plattsburgh, PA.

Stirling Spadea worked for the Bucks County Department of Corrections, at Rehab, from January 1, 1975 through July 30, 1983 to supplement his income as a painter.

Sterling Spadea and James A. Michener

Stirling Spadea with Portrait of James A. Michener