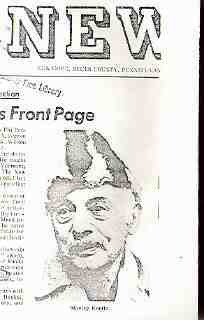 Stanley Jaspoon Kunitz was a resident of Lumberville in the late 1950s and was instrumental in organizing the New Hope Workshop in Jo Jenks' studio on Mechanic Street. This elite group of writers included luminaries such as Josephine Herbst, Jean Toomer, and Jules Gregory. While affiliated with the New Hope Group, he taught contemporary poetry and was associated with the members of the Cooperative Painting Project, which met Thursdays in painter Charles Evans' studio.

Kunitz was best known as a poet who had published dozens of volumes. Selected Poems 1928-1958 won the Pulitzer Prize in 1959. He continued to win awards as recently as 1995, when, at the age of ninety, he won the National Book Award for the collection, Passing Through: The Later Poems, New and Selected. Kunitz admired the poems of William Blake and was influenced heavily by him. Other writers whom Kunitz admired were Rudyard Kipling, Keats, and Wordsworth. In the age of computers, Kunitz still wrote his ideas in a notebook, later typing them on an old manual typewriter. He was twice U.S. poet laureate. Kunitz died May 14, 2006 at the age of one hundred.

Teachers and Influences
One of Stanley Kunitz's favorite poets was William Blake. He was also an avid reader of Rudyard Kipling, Robert Service, John Keats, and William Wordsworth.

Connection to Bucks County
Stanley Kunitz was a former resident of Lumberville. In the late 1950s, he was instrumental in organizing the New Hope Workshop in Jo Jenks' studio on Mechanic Street. He also taught contemporary poetry. Kunitz was associated with the members of the Cooperative Painting Project, which met on Thursday afternoons in painter Charles Evans' New Hope studio during the late 1930s.

Essays
The Wild Braid: A Poet Reflects on a Century in the Garden, collaboration with Genine Lentine, 2005