"It is safe to say that Terrell, along with long-time Playhouse producer Mike Ellis, gained more fame for the New Hope-Lambertville area than any other persons."
-Charles Shaw, New Hope Gazette, December 4, 1986

St. John "Sinjun" Terrell contracted "incurable theater-itis" early on. He was the first Jack Armstrong on the radio series, Jack Armstrong, All-American Boy. He worked as a fire-eater in a carnival when he was sixteen years old. Later in life, his daring feats continued, when as a producer, he launched two prominent professional summer theaters in the Bucks County area. In 1939, he produced the Bucks County Playhouse's first season. He opened with a hit, Springtime for Henry starring Edward Everett Horton, followed through with a successful season, and closed with a profit. In 1949, he created and produced the country's first commercial arena-type theater under a tent, the Lambertville Music Circus, which he ran until 1970. He originated the re-enactment of Washington's Crossing of the Delaware in 1953 and, for twenty-five years on Christmas, he played the role of George Washington. He was an actor on Broadway in the 1930s, appearing in Elmer Rice's Judgement Day and Maxwell Anderson's Winterset. He has regularly appeared in television commercials throughout the years. He nurtures his interest in United States folk culture as a member of the Board of Directors of the Folk Culture Center of the Library of Congress. 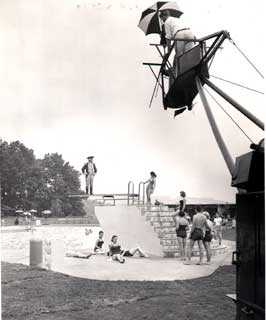 Connection to Bucks County
New Hope Gazette journalist, Charles Shaw, credited St. John Terrell, along with Mike Ellis, for gaining "more fame for the New Hope-Lambertville area than any other persons." He produced the first season of the Bucks County Playhouse in 1939, leading to a long, successful life as a theater. He created and produced the Lambertville Music Circus from 1949 to 1970. He originated the re-enactment of Washington Crossing the Delaware in 1953. He played the role of George Washington for twenty-five years, and the event survived his retirement to become an annual Christmas Day event. 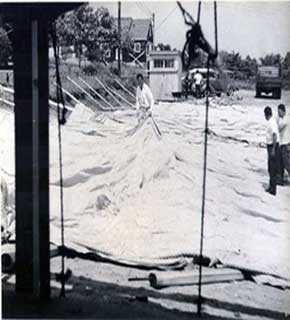 Affiliations and Memberships
Member, Board of Directors of the Folk Life Center of the Library of Congress, Washington, D.C.

At the Bucks County Playhouse

At the Lambertville Music Circus