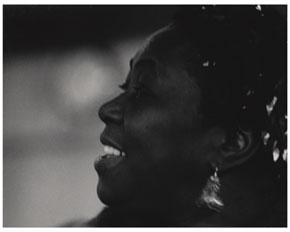 Dr. Selma Burke was a world-renowned sculptor and painter whose bust of President Franklin Delano Roosevelt appears on the dime. One of ten children of an African Methodist Episcopal Zion minister in rural North Carolina, Burke first learned to sculpt while molding clay from a nearby river. Encouraged by her mother to pursue a practical career, Burke trained as a certified nurse. While working as a nurse in New York, she became involved in the Harlem Renaissance and served as a sculptor's model, all the while preparing to become an artist. In 1941, she received an M.F.A. at Columbia University and later studied art in Europe. Primarily a sculptor, Burke crafted figures of rugged beauty from wood, bronze, or stone, hewn in a style of almost classical realism. She sculpted several celebrities, including Dr. Martin Luther King Jr. and Pearl S. Buck. The bronze statue of Buck, Uplift, was dedicated at the Pearl S. Buck House in 1991. She also painted in watercolor, oil, and acrylics. A committed educator, the bearer of two earned and eight honorary doctorates, Burke established two art schools while teaching at Haverford and Swarthmore Colleges. She also taught at the Solebury School and several other institutions.

Teachers and Influences
Oronzio Malderelli
Burke studied the figure in Paris, France with Aristide Maillol in 1938 and with Henri Matisse.

Connection to Bucks County
Selma Burke lived in Bucks County from 1947 until her death in 1995. She resided in an old farm house in Solebury Township, near New Hope. Burke initially moved to New Hope to find "a place where there is a stream and where there is a small house, because I am God's worst housekeeper and I don't want a house that I'll have to keep instead of doing my sculpture."