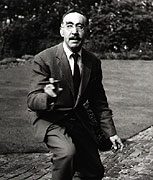 "[Perelman was] one of the few remaining writers in America who devoted themselves wholly to humor."
-William Shawn, The New York Times, October 18, 1979

Touted as "the funniest man alive," S.J. Perelman was a remarkably accomplished and versatile humorist. Through wordplay, puns, and scathing parody, he achieved his celebrated effect of "spoofery" and "zaniness." He is quoted in The New York Times as saying, "I don't believe in kindly humor-I don't think it exists."

Raised in Providence, Rhode Island, Perelman attended Brown University, where he met Nathanael West, whose sister, Laura, he married. The Perelmans divided their time between New York City and Erwinna, in Bucks County.

Initially a cartoonist, Perelman wrote brief humor pieces for highbrow magazines, including, most notably, the New Yorker. He particularly delighted in parodic travel narratives, the most famous being Swiss Family Perelman. To supplement his income, he wrote screenplays, sometimes in collaboration with his wife, Laura. His most famous scripts were the Marx Brothers' Monkey Business and Horse Feathers, as well as Around the World in Eighty Days, for which he earned an Academy Award in 1956.

In the March 30, 1975 issue of The Philadelphia Inquirer, Perelman stated, "My late wife and I collaborated during the '30s. The studios had a profound respect for husband-and-wife teams, thought they were fashionable. They were under the impression they'd get double value-writing during the day, discussing the script in bed at night."

Hollywood snapped up husband-wife writing teams during the 1930s. For young authors, this opportunity was alluring. An individual could seldom earn more than $500 to $600 per week in Hollywood, while a husband-wife team could command twice that amount. In this manner, the Perelmans' friends, Dorothy Parker and Alan Campbell, were earning $5,200 per week, as well as achieving artistic success with such distinguished films as the Academy Award-winning A Star is Born. Enticed by the prospect of fame and fortune, the Perelmans embarked in 1935 on a pilgrimage to Hollywood.

Much to the Perelmans' chagrin, the screenplays they wrote in Hollywood were poorly received. Typically, they wrote B-movies about such cliched, if popular, subjects as orphans (Boy Trouble) or milksops drawn into crime (The Golden Fleecing and Ambush). At their best, in Ambush and Boy Trouble, they received accolades for their wit, tight pace, and homespun charm. Although the Perelmans, working collaboratively, did not write Hollywood masterpieces, they earned the income necessary to support S.J.'s writing career in Bucks County.

After becoming widowed in 1970, Perelman lived for three years in London before returning permanently to the United States.

Connection to Bucks County
S.J. Perelman resided in Bucks County from 1932 to 1970. With his wife, Laura, and his brother-in-law, Nathanael West, Perelman bought Eight Ball Farm in Erwinna. Eager to experience country life, Perelman attempted to raise turkeys, an endeavor he later parodied in Acres and Pains.

Screenplays
Monkey Business, with Will B. Johnstone and Arthur Sheekman, 1931
Horse Feathers, with Bert Kalmar and Harry Ruby, 1932
Boy Trouble, with Laura Perelman, 1932
Around The World In Eighty Days, with James Poe and John Farrow, 1956

Book cover for Acres and Pains