While on-board transatlantic ocean liner, Augustus, or Gus, Goetz met the well-known theatrical producer Philip Goodman and his daughter, Ruth. Ruth and Gus soon became inseparable and were married on October 11, 1932. The Goetzes collaborated as playwrights and screenwriters for twenty-seven years. Among their most successful works was The Heiress, a stage adaptation of Henry James' 1881 novel Washington Square, which debuted on Broadway in 1947. The play deals with the universal themes of love and betrayal, good versus evil, innocence versus experience, and greed. The main character, Catherine, is the only heir to the estate of her unloving father, who threatens to disinherit her if she marries her suitor. On the eve of their marriage, the suitor deserts her. Years later, he returns to a heartbroken but wiser Catherine.

After a long run on Broadway, the Goetzes wrote the Academy Award winning film adaptation starring Olivia De Havilland and Montgomery Clift (1949). The play was revived on Broadway in 1995 and was once again a hit, receiving four Tony Awards, including Best Revival. The Goetzes adapted two more novels for the stage, the first being The Immoralist (1954) based on a novel by Andre Gide, which was notable for its open discussion of homosexuality. James Dean made his stage debut in the production. The second stage production was The Hidden River (1957), adapted from a novel by Storm Jameson, dealing with the search for a French traitor. The Goetzes also wrote a number of screenplays such as Carrie (1952) and Trapeze (1956). Stage Struck (1957), the Goetzes' last screenplay, was released after the death of Augustus Goetz in 1957. 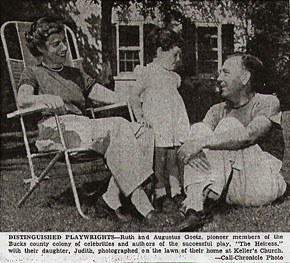 Connection to Bucks County
Ruth and Augustus Goetz bought a small farm house in 1936, located in Keller's Church, Bedminster Township, Pennsylvania in order to devote their time solely to writing. They were among the first playwrights to settle in Bucks County's "genius belt". Ruth left the farm after Augustus died and was buried at Keller's Church in 1957. The farm was on the land that later became Lake Nockamixon. The Heiress, starring John Carradine, Margaret Phillips, Oliver Thorndike, Margaret Mullen, Sara Seegar and Grace Kelly, was performed at the Bucks County Playhouse in 1949.

Colleagues and Affiliations
The Goetzes were close friends of Laura and S.J. Perelman who regularly corresponded with them from Hollywood when the Perelmans needed help with their farm in Bucks County. They were neighbors of Samson Raphaelson and were very close to Beatrice and George S. Kaufman, who directed and revised one of their first plays, Franklin Street (1940). A widowed Kaufman met his second wife, Leueen MacGrath, at a party at the Goetzes' home in New York. They also knew Nathanael West, Jerome Chodorov and Moss Hart, as well as Dorothy Parker and Alan Campbell. Ruth Goetz remained close to both Kaufman and Perelman during their last years of life.

Ruth and Augustus Goetz with their daughter, Judith, c. 1940. Image courtesy of the Collection of the Spruance Library of the Bucks County Historical Society.