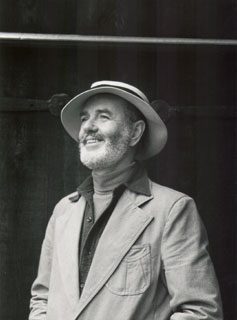 "A truly excellent design-one that is pleasing to the eye, graceful in line and serves a practical function-this will survive the trends and fads of the times and will retain its classic beauty forever."
-Robert Whitley

Robert Whitley was a studio furniture designer and master craftsman of national reputation. Equally well versed in contemporary and antique furniture designs, Whitley was a third-generation craftsman who inherited his skill in cabinetry, knowledge of woods and joinery, and formula for oil finishing from his father and grandfather. This same family oil formula had become a signature of sorts for Whitley and can be seen in the majority of his works. Among his many commissions are a chess set presented by President Richard Nixon to the Soviet Union, now in the collection of The State Hermitage Museum in St. Petersburg, Russia; a recreation of President John F. Kennedy's Oval Office desk for the Kennedy Memorial Library, Boston; and the restoration of several important pieces at Independence Hall, Philadelphia, where he has also served as master conservator. His contemporary furniture designs had earned the artist numerous national awards. Whitley's work resides in the Renwick Gallery, Smithsonian Institute, Washington, D.C.; the Museum of Fine Arts, Boston; and the Philadelphia Museum of Art collections, among others.

Whitley's Starfish Desk, Michener Art Museum Chair, Throne Bench, Throne Desk, and Throne Chair are part of the Michener Art Museum’s permanent collection. Throne Bench was selected for the collection by a panel of judges from amongst fifty submissions from artists in the Mid-Atlantic region. These and other pieces by Whitley have been exhibited at the Michener Art Museum in Bucks County Invitational II: Contemporary Woodworkers (1998), Robert Whitley: Beauty, Function, and Grace (2008), and Parting Gifts: Artists Honor Bruce Katsiff, Director/CEO, 1989-2012 (2012).

In 2016, Whitley was awarded a lifetime membership in the Society of American Period Furniture Makers (SAPFM) in recognition of his support and through a lifetime commitment to advancing the understanding, education and appreciation of period furniture.

Influences and Teachers
Whitley trained under his grandfather and father. Whitley's father was a commercial artist and an antique collector.

Connection to Bucks County
Whitley lived and had a studio on Laurel Road in Solebury Township. He opened his first cabinetmaking shop in 1948 in Lambertville, New Jersey. In 1970, he moved across the Delaware River to Solebury.