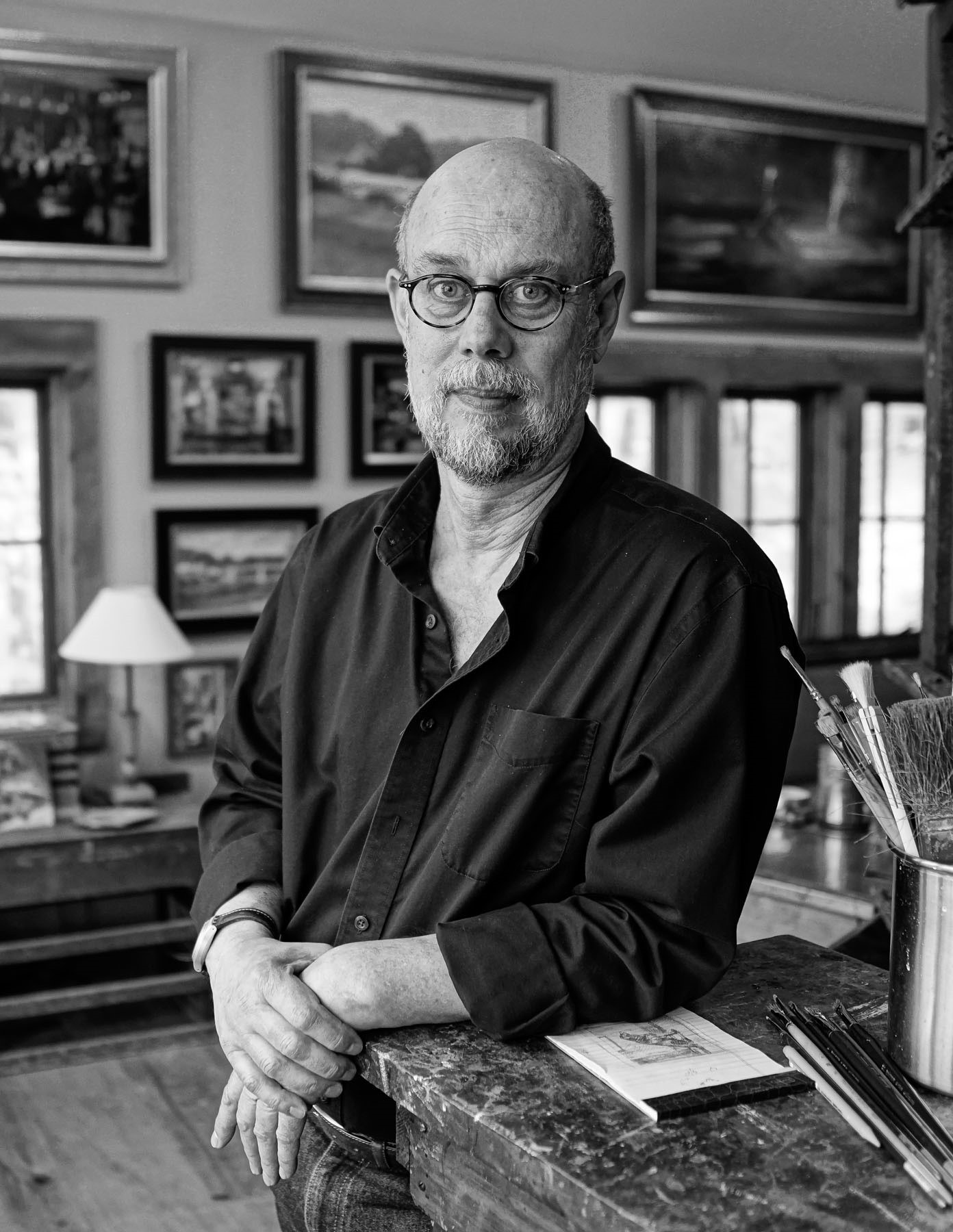 “No matter how local his subject may be, his art is universal, built on common experience. He’s not trying to describe a thing, he’s describing an encounter, in paint rather than words. Viewers relate to his words because they have been there, or somewhere like that. His paintings take them to that common understanding.”

Robert Beck grew up in Bucks County, Pennsylvania, and left a career in the business world at the age of forty to pursue painting. He attended the Pennsylvania Academy of the Fine Arts in Philadelphia. Beck currently maintains studios in New Hope, Pennsylvania, and New York City, New York.

Beck’s work has been the subject of three solo museum exhibitions at The Trenton City Museum at Ellarslie (2007), The Maine Maritime Museum (2016) and the James A. Michener Art Museum (2021). Beck’s work has been presented in thirty solo gallery exhibitions, including the National Arts Club (New York), the Rosenfeld Gallery (Philadelphia), the Morpeth Gallery (Pennington and Hopewell, New Jersey), New Hope Arts Center, and the Gallery of Robert Beck (Lambertville, New Jersey). His paintings have been accepted to more than fifty juried exhibitions. Beck is currently represented by Morpeth Contemporary in Hopewell, New Jersey.

Beck has received thirty significant painting awards, was a finalist for the Pew Fellowship in 2000, and was awarded the Philadelphia Sketch Club Medal for Excellence and Contribution to the Arts by the oldest arts club in America in 2014. He was the Honored Artist at the 2017 Phillips’ Mill Exhibition and celebrated as the New Hope Arts Center Legacy Artist in 2018.

Aside from working as an artist, Beck is also a teacher, curator, lecturer, and writer. Additionally, he has hosted a radio interview program. Beck’s column on his art-related experiences, entitled A Thousand Words, has appeared monthly in ICON Magazine since 2005. A collection entitled A Thousand Words: Essays and Paintings by Robert Beck was published by the James A Michener Art Museum as a companion to its retrospective exhibition on Beck’s paintings.

Beck is known for painting in “visual essays,” in which he addresses a subject through multiple images. This includes work created live while traveling the Mississippi River on a towboat pushing barges, amidst a symphony orchestra during its performances, with a racing team in Europe, and traveling with doctors in Senegal. His paintings depicting life in the Maine Maritime community are his largest body of work with a single focus. Beck’s subjects vary, but the common thread in all of his images is viewpoint: the depiction of his encounter. Through Beck’s deft observation and description, his paintings serve as a chronicle of our time.

Beck is a member of the Salmagundi Club, the Philadelphia Sketch Club, and is a Signature Member of the American Society of Marine Artists. He lives with his wife, Doreen, in New Hope and New York. You can view his work at www.robertbeck.net.

Served as a board member of the Fellowship of the Pennsylvania Academy of Fine arts and as president of Artsbridge in Lambertville, New Jersey.

Member of the Salmagundi Club, The Philadelphia Sketch Club, and a Signature Member of the American Society of Marine Artists.

Robert Beck has lived in Bucks County since he was thirteen years old. He presently lives and maintains a studio in New Hope/Solebury.