"I'm an artist working with furniture that has sculptural qualities. There's more emotion involved than anything else-I need that."
-Phillip Lloyd Powell

Born in Germantown, Pennsylvania, in 1919, Phillip Lloyd Powell began crafting furniture during his teen years. After studying mechanical engineering at the Drexel Institute of Technology in Philadelphia, Pennsylvania (1939-1940) and then meteorology at Chanute Air Force Base in Rantoul, Illinois (1942), he began working as a meteorologist in Great Britain with the Army Air Corps.

"When I originally came to New Hope, having run screaming from office or business life, I was looking for a quiet unstressful life, really becoming a hermit, but from the moment I started building my first house on the highway, I was inundated with people and eventually business and I went with the flow."
-Phillip Lloyd Powell

In 1947, he moved to New Hope, Pennsylvania where he purchased an acre of land and began building his home. Inspired by George Nakashima and Wharton Esherick, Powell began developing his own designs in the early fifties, which he sold from his New Hope shop. By 1953, he had moved his showroom to Mechanic Street, where he would create a line of lamps as well as slate-topped tables and chairs. His shop was open by appointment and from 8 pm to 12 am on Saturdays, when the Bucks County Playhouse theater crowd was wandering about town. He would make enough money from that one evening, so the showroom could remain closed for the rest of the week.

When designer-craftsman Paul Evans moved to New Hope in 1955, Powell and Evans opened a joint showroom and began collaborating on screens, tables, and cabinets.

Displayed in their showroom was a walnut fireplace surround (ca. 1956-1958), a prime example of Powell's sophisticated deep-carved work with sinuous carvings that follow the wood grain and highlight irregularities of the wood. The Michener acquired the fireplace surround in 2008, and it is now part of the permanent exhibition, Intelligent Design, which opened in 2012.

In 1957, a Powell and Evans' metal sculptured-front chest was included in the Museum of Contemporary Crafts seminal exhibition Furniture by Craftsmen, which showcased objects by such key participants in the Studio Furniture movement as Wharton Esherick, Sam Maloof, and George Nakashima. In 1961, Powell and Evans exhibited their work in a two-man exhibition at America House in New York. Powell would later reflect on his partnership with Evans, writing, "Paul helped me refine my engineering-based designs, as his background was in the arts, and in return, I turned his art into furniture."

Shortly after Powell and Evans ended their collaboration in New Hope in 1966, Powell began to travel extensively. As stated by friend Herb Speigel, Powell's modus operandi was to get a commission and make enough money for a trip. He drew inspiration from his travels including places such as Sicily, England, Morocco, Portugal, Japan, and Spain, where he lived from 1976 to 1979, before returning once more to New Hope. Powell also frequently visited the Nataraj Grukul School in West Bengal, India and helped fund some much needed improvements to the school.

In 2002, Powell was commissioned to create a dedication shovel as well as a bench (called the Sun and Moon Bench) for the New Hope branch of the James A. Michener Art Museum.

Powell passed away in March of 2008 at the age of eighty-eight. At the remembrance gathering held in May, friends gathered to share stories and photographs of the woodworker. Herb Speigel gave a eulogy outlining all the great ways that Powell carried out his artistic vision during his lifetime.

The twelve-foot high iconic Door by Phillip Lloyd Powell, that once led from his former home to his studio on Route 202 in New Hope, was permanently installed at the Michener Art Museum in Doylestown in October 2010. 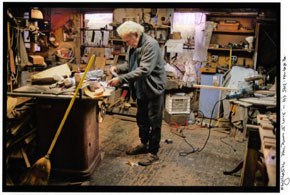 Education and Training
Drexel Institute of Technology for Engineering, Philadelphia, Pennsylvania, 1939-1940
Powell was trained in Meteorology at the University of Chicago in 1941 after he was drafted as a member of the Army Air Force. Additionally, he was a self-taught artisan.

Connection to Bucks County
Powell bought property on Route 202 in New Hope, Pennsylvania in 1947, where he purchased a book on home building and then set to work building his own home, studio, and shop. In 1953, Powell opened a showroom on Mechanic Street, placing himself in the center of town. He and fellow artist Paul Evans opened a showroom on North Main Street in 1955, which they shared for the next ten years. They also had a showroom on Bridge Street and Stockton Avenue in New Hope. Beginning in 1986, he built a new home-also in New Hope-entirely according to his own designs, with winding staircases, mosaics with pieces from around the world and doors he carved himself. In 2005, Powell received the New Hope Lifetime Achievement Award from the New Hope Borough Council.

Phill Powell in his Lighthouse

Phill Powell: Wood on the Hoof