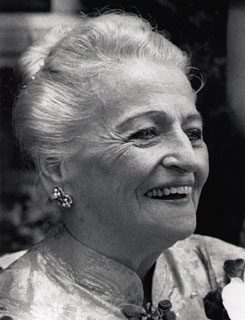 An exceptionally prolific and versatile author, Pearl S. Buck wrote novels, children's tales, short stories, plays, and biographies. Her most famous novel, The Good Earth, earned her the Pulitzer Prize in 1932. Subsequently, in 1938, she received the Nobel Prize in literature. For Buck, who grew up in China as the daughter of Presbyterian missionaries, Chinese culture was intimately familiar to her. As an author, she conveyed this perspective in her numerous writings about Asia. Buck was actively involved in philanthropy, establishing Welcome House, an adoption agency for children, and the Pearl S. Buck Foundation, which finances the needs of children in Asia. Although the former organization has been incorporated into the latter, both continue to serve Buck's dream, promoting the welfare of underprivileged Asian children.

Pearl S. Buck on her 80th Birthday. Photo by Jack Rosen. Image courtesy of the James A. Michener Art Museum.

Connection to Bucks County
From 1935 to her death in 1973, Pearl S. Buck resided on Green Hills Farm in Perkasie, Pennsylvania, where she has since been buried. Choosing this site originally because the rolling green hills and stone homes reminded her of China, Buck decorated her estate with many Asian artifacts. Close to James A. Michener and Oscar Hammerstein II, Buck involved them in her humanitarian projects. Since her death, the Pearl S. Buck Foundation operates out of her Bucks County estate. Designated a National Historic Landmark, Green Hills Farm is open to tourists.

Nonfiction
Wrote various books about China and children including:
The Exile, 1936
The Fighting Angel, 1936
The Children Who Never Grew, 1950
China Past and Present, 1972
A Community Success Story: The Founding of the Pearl S. Buck Center, 1972

"[Her] concern for better understanding between the races, combined with a special interest in the welfare of children, led to Mrs. Buck's notable achievements as a humanitarian."
-Cecil D. Andrus, Former Secretary of the Interior

Usually a reserved woman, Pearl S. Buck would weep openly when people spoke of children's suffering. Spending many years in Asia, Buck often witnessed the oppression and privation afflicting millions of children. Her compassion, idealism, and initiative drove her to take on this problem. Motivated by her own experience, Buck in 1949 founded an adoption agency, Welcome House.

In 1964, Buck created a new organization, the Pearl S. Buck Foundation, to serve the needs of children in Asia. A thriving organization to this day, the Foundation ranks among Bucks' most important legacies.

"More than anybody else through 1950... Pearl Buck defined Asia for American readers and many European readers."
-Peter Conn, Philadelphia Inquirer, June 26, 1992

Pearl Sydenstricker lived in China until she was seventeen years old. Immersed in Asian culture, Pearl delighted most of all in the folktales her nurse told her. Raised in this bicultural environment, Pearl Buck was capable of comprehending and appreciating both Chinese and American culture.

Buck's most important literary portrait of China was The Good Earth, for which she received the Pulitzer Prize in 1932. Together with Fighting Angel and The Exile (biographies of Buck's father and mother), she was awarded the Nobel Prize in literature in 1938 "for rich and genuine epic portrayals of Chinese peasant life, and for masterpieces of biography."

Through her diverse writings, which included fiction, folklore, biography, and children's tales, Buck offered a vividly descriptive and realistic portrait of life in Asia. Her work often concerns China's strain in changing from a traditional to a modern society and the socioeconomic hardships endured by Chinese peasants. Neglected for several decades, Buck's work appears to be undergoing a long overdue revival.