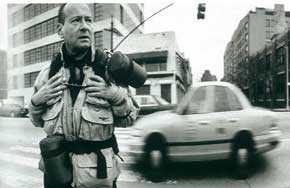 After a successful professional career with Colgate-Palmolive, Paul Grand began an odyssey of making images that focus on rich color, jarring contrasts, architectural renderings, and the play of textures, light and shadow on impervious surfaces. His approach is painterly, referencing the color field painters Mark Rothko and Barnett Newman. Additionally, spaces are angular, structured, and rhythmic. His travels to Morocco, India, and especially Mexico are cultural explorations which inform a compositional approach almost devoid of human presence, yet man-made references populate the images in the form of industrial objects, concrete, wiring, molded tin, and peeling paint.

According to Grand's philosophy of seeing, it is a full-time occupation, and a photographer must challenge himself to see fully, distinctly, and idiosyncratically, for this is the only way to notice the details that less observant spectators overlook. He believes that detail is seminal and should be emphasized at the expense of the big picture. This philosophy, combined with Grand's fondness for hiking, has led him to develop a unique, but simple approach to photography. He chooses to walk slowly in order to absorb and perceive as much as possible.

One of Grand's most well-known projects took place in Manhattan in the late 1990s. Over the course of two and a half years, he walked an estimated 504 miles, covering up to 15 miles per day and toting 35 pounds of camera equipment in his backpack. Grand explored SoHo, Chinatown, Little Italy, Harlem, Upper West Side, the meat-packing district, and the Hudson River, taking photos of brownstones, subway stations, steel beams, apartment windows, and pedestrians along the way.

Grand has exhibited in New Jersey, New York, and Pennsylvania, at venues such as the Trenton City Museum and Phillips' Mill in New Hope. In addition, one of his photographs is featured every other week on the publisher's page in the Bucks County Herald.

The exhibition Paul Grand: Beyond the Surface was featured at the Michener Art Museum in the Fall of 2015.

Connection to Bucks County
Grand has lived in Doylestown, PA since 2005.

Collections
Personal collection of the King of Morocco