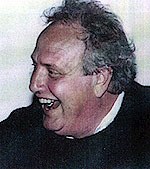 "One of Evans lasting contributions to the world of art furniture in his enthusiastic and pioneering embrace of new technology and his courageous use of revolutionary materials. Unlike his neighbor, George Nakashima, and his friend and mentor, Phil Powell, who both shunned new technologies and nontraditional, nonorganic materials, Evans embraced technology, making it his own."
-Collecting Modern, pg. 90

Internationally recognized for his unique residential furniture, Paul Evans trained early on as a metalsmith. His innovative mind eventually led him to create extraordinary metal furniture. He is best known for using his welding, metallurgy, and jewelry design skills to create collage-like metal furniture with sculpted, high-relief abstract forms.

His unique furniture designs found homes in the collection of Mrs. Aileen Osborn Webb, among many others.

In 1952, Evans was awarded an Ellen S. Booth Scholarship, which allowed him to attend the Cranbook Academy of Art in Bloomfield Hills, Michigan. He then moved to Sturbridge Village, Massachusetts, where he worked in a working history museum as a living craftsman, demonstrating various aspects of silversmithing. He also sold designs to the Raymor Company and various European design firms.

Seeking change, Evans moved to Lambertville, New Jersey in 1955, operating a workshop located on Goat Hill Road in a former chicken coop, just outside Lambertville. At the same time, he began sharing a showroom in New Hope with Phillip Lloyd Powell. Powell encouraged him to transfer his metallurgy skills to furniture. They worked closely together, and their creative partnership lasted for ten years. In 1970, Evans needed additional space and relocated his growing operation to Plumsteadville, Pennsylvania. During this time, he employed a staff between thirty-five and eighty people, depending on production demands. According to his children, most of his pieces were signed, and the custom built pieces were signed and dated. In 1979, he opened an additional showroom on East 61st Street in New York City. He created full lines of furniture for design company Directional Furniture. His work was shown at America House in New York for more than a decade.

In addition to his creative partnership with Phillip Lloyd Powell, Evans worked closely with Dorsey Reading. Reading, a young machinist from Lambertville, came to work for Evans in 1959. He initially began as Evans' apprentice but quickly became his most relied-upon employee, shaping Evans' drawings into physical pieces.

Evans created sculpture as well as furniture and his major efforts for furniture can be broken down into several significant design choices, including: Copper, Bronze, and Pewter; Sculpted Steel; Argente; Sculpted Bronze; Verdigris Copper; and Cityscape.

Works of Paul Evans II were on display in the Michener Art Museum's permanent installation, Intelligent Design, which opened in 2012.

In 2014, the first comprehensive survey of Paul Evans' work documented Evans' significant role in the mid-century American studio furniture movement, his approach to furniture as sculpture and abstract composition, and his unremitting new approaches to metal. Opening at the Michener Art Museum and then traveling to Cranbrook Art Museum, Paul Evans: Crossing Boundaries and Crafting Modernism was comprised of some 60 works, spanning the artist's entire career with choice examples of Evans' early metalwork and jewelry and collaborative pieces made by Evans and Phillip Lloyd Powell during the 1950s when they shared a studio. The show had a comprehensive selection of Evans' studio work representing his sculpted steel; verdigris copper; copper, bronze and pewter; argente; sculpted bronze, and cityscape techniques. The show included examples of Evans' sculpture as well as a selection of work he produced for Directional Furniture Company and a selection of studio craft work by his contemporaries.

On March 6, 1987, Evans drove north to Massachusetts to be with his wife and begin his retirement. The following morning, while watching the sunrise, he suffered from a fatal heart attack. It was mentioned that friends and family were not surprised because Evans was happiest when he was busy and creating. Phillip Lloyd Powell said during the eulogy, "Paul Evans danced on the edge of the volcano."

Connection to Bucks County
Born in Trenton, New Jersey, Paul Evans graduated from George School in Newtown, Pennsylvania in 1949. Beginning in 1955, he shared a showroom with Phillip Lloyd Powell on Main and Mechanic Streets in New Hope, Pennsylvania. According to Powell, this started an artistic relationship that lasted with fervor for about ten years. In 1960, he purchased a home and shop in New Hope on Aquetong Road. Evans and Powell moved their showroom to a building near the New Hope Railroad in 1963. In 1969, Evans' growing business demanded a new location. He opened a manufacturing facility on Route 611 in Plumsteadville the following year.

Working on a forged door