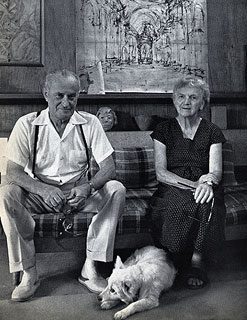 "From the beginning, Noemi combined her creative efforts with mine. Noemi had her finger in every single job... She became a source of inspiration for me, a teacher and a most faithful companion in our combined search for eternal values."
-Antonin Raymond

Noemi Raymond was a designer and craftsperson who collaborated with her husband, architect Antonin Raymond. Raised in France and Switzerland, Noemi was the daughter of affluent, cultured European parents. She began her career as a commercial artist in New York, working as a caricaturist for newspapers and designing posters for theaters. After marrying architect Antonin Raymond in 1914, Noemi increasingly turned to design, coordinating her work on interiors with her husband's architectural plans for exteriors. She created textiles and furniture, as well as paintings done in a post-impressionist or expressionist style. In addition to working on private residences, Noemi designed the interior for such distinguished buildings as the Iranian Embassy in Tokyo. 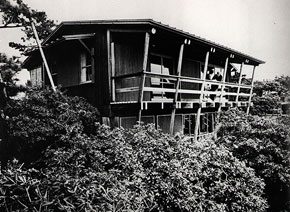 "[I]imagine my surprise on arriving in Japan to find farms and Shinto shrines...containing all the features which we so ardently desired to create in the new architecture."
-Antonin Raymond

The Raymonds, in turn, contributed to Japanese architecture by introducing modernism, as well as the most current industrial materials. Typically, Raymond adapted state-of-the-art design to traditional Japanese forms. Several of his structures, such as the Reader's Digest Building in Tokyo and the Nanzen University campus in Nagoya, won awards and, subsequently, influenced architecture for years to come. Raymond's work aided Japan in times of crisis, helping the nation rebuild after the Kanto earthquake in 1923 and the bombings of World War II. In this way, the Raymonds left their mark on Japan just as its culture shaped their own aesthetics. 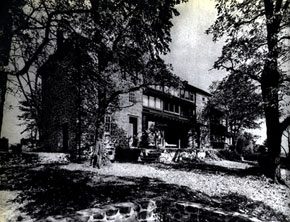 "There is both harmony and dis-harmony in music. Music and architecture are the same."
Antonin Raymond

When Antonin and Noemi Raymond married in 1914, they set up adjoining tables, creating the workshop where for several years they would collaborate in designing buildings. In their work, the Raymonds followed the aesthetic principles of orientation and integration. Orientation means the inclusion of environmental features, such as hills or weather patterns, in planning a building. Integration refers to the design of exterior and interior elements together, so that decorative features, such as tapestries or lighting fixtures, optimally enhance the building's structure. In this way, the Raymonds created a complete environment, a structure of organic wholeness and beauty.
The Raymonds designed several buildings together, including the Iranian Embassy in Tokyo and three private homes in the Bucks County area. They substantially redesigned their own eighteenth-century farm house, replacing the southern wall with windows opening out to a meadow, while tearing down interior walls to lengthen the living room. Through these renovations, coupled with sparse and simple decoration, the Raymonds achieved the effect of broad, open space in harmony with the countryside surrounding them.

Connection to Bucks County
The Raymonds bought a 200 acre farm in the mid 1930s on Pidcock Creek Road, Solebury Township, outside of New Hope. The house is known for the architectural alterations the Raymonds did to the farm house, such as the addition of large glass windows to an old farm structure. The Raymond's lived in Bucks County intermittently for thirty-five years, later retiring there.

Exhibitions
Noemi was not accredited with any exhibitions on her own, but she collaborated with her husband, Antonin, in all of his projects.

Architecture
Noemi Raymond collaborated with her husband on many projects, designing interiors for structures such as the Iranian Embassy in Tokyo, Japan.

Teaching and Professional Appointments
Noemi and Antonin Raymond joined Frank Lloyd Wright's staff at Taliesin in Spring Green, Wisconsin in 1915.
Noemi and Antonin Raymond went to Japan to work for Frank Lloyd Wright in 1919 to help design the Imperial Hotel in Tokyo.
Antonin Raymond started his own architectural firm with Noemi in Japan in 1921.
They left Japan just before the outbreak of World War II and bought a farm in New Hope, Pennsylvania, which was also their business office. They reestablished their Tokyo office after the war and retired in Bucks County in 1976.