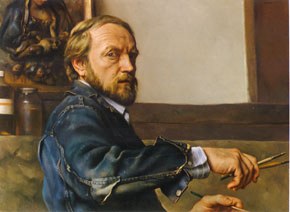 Painter Nelson Shanks, particularly renowned for his portraits, began his college education by studying architecture. His serious study of art began at the Kansas City Art Institute, followed by study throughout Europe, particularly in Italy, before returning to study in New York. A resident of Bucks County since 1968, Shanks has a long-established reputation as one of the foremost advocates and practitioners of classicist and realist painting. His work typically includes portraits of well-known figures as well as still lifes, imbued with allegorical and symbolic meanings. Strongly influenced by works from the Italian Renaissance and the Baroque period, Shanks painted primarily in oil on canvas or panel. Figures, interiors, portraits, and landscapes were his most common subjects. Shanks' commitment to the traditions of humanism and progressive realism was emphasized when he founded the School for Contemporary Realist Art, in Philadelphia in 2002 with his wife Leonora, of Studio Incamminati.

He had a retrospective exhibition at the Michener Art Museum, Nelson Shanks: A Brush with Reality, in 2013.

Connection to Bucks County
Shanks lived in Bucks County from 1968 until his death in 2015. Before moving to his home and studio in Andalusia, Shanks lived in New Hope at Spring Dale, an eighteenth century mill that once belonged to Dr. Charles Huffnagle. It is also where artists Robert Spencer and Charles Ramsey lived in the early part of the twentieth century.