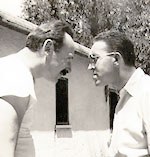 "[Nathanael West was] the chief neglected talent of [his] age."
-Leslie Fiedler

Although Nathanael West's fiction garnered some praise from the few critics who noticed it, the general public ignored him. West observed that he only earned $700 selling his novels. Since West's death, however, scholars and fellow novelists alike have recognized the importance of his fiction. A satirist, West's parodies of Western civilization are tinged with surrealism. In a voice shaped by the poverty and despair of the Great Depression, West portrayed the depravity and helplessness of poverty and loneliness in A Cool Million and Miss Lonelyhearts. Typically, West's characters are so grotesquely tragic as to appear comic. In order to support himself, however modestly, West also wrote screenplays in Hollywood between 1936 and 1940. Earlier, he had made a living managing hotels in New York City, where he often provided rooms free of charge to authors he admired in order to enjoy their company. Born Nathan Weinstein in New York, the son of Jewish immigrants, he changed his name in 1926 as part of an ongoing attempt to recreate his identity. West was killed in a car accident on December 22, 1940. His bride, Eileen McKenny, the inspiration for the popular play My Sister Eileen, died at his side.

Connection to Bucks County
Nathanael West first visited Bucks County in 1932, invited by Josephine Herbst, with whom he stayed while writing Miss Lonelyhearts. Fascinated by West, Herbst subsequently wrote the story A Hunter of Doves about him. Impressed by the beauty and affordability of Bucks County, West persuaded his sister, Laura, and brother-in-law, S.J. Perelman, to purchase Eight Ball Farm with him in Erwinna. At this farm, formerly owned by socialist author Michael Gold, West wrote the novel A Cool Million (1934). Residing in Bucks County between 1932 and 1936, West befriended fellow left-wing authors, such as Joseph Schrank, John Wexley, and Dorothy Parker. Collaborating with Perelman, he wrote the play Even Stephen, and, with Joseph Schrank, he wrote the anti-war drama, Good Hunting.

Colleagues and Affiliations
West finished his novel Miss Lonelyhearts during a visit to Josephine Herbst in 1932. Nathanael West later collaborated with his brother-in-law, S.J. Perelman, on an unproduced play, Even Stephen. West included fictional Bucks County locations in the novel A Cool Million, which was written on the farm. He also collaborated with Bucks County playwright, Joseph Schrank on the play Good Hunting, which opened in New York in 1938. West's wife, Eileen was the subject of the novel My Sister Eileen, written by Eileen's sister Ruth McKenny. It was adapted to the stage by Jerome Chodorov and Joseph Fields and directed by George S. Kaufman. The original production starred Bucks County actress Shirley Booth. The play was later adapted to a musical and movie entitled Wonderful Town by Chodorov and Joseph Fields.

Poetry
My Island Of Sonnets, under the name Nathan Weinstein, 1974

Black comedy pervades the fiction of Nathanael West, highlighting both the absurdity and tragedy of twentieth-century American life. West's characters and their plight are so grotesquely pathetic that the reader hardly knows whether to laugh or cry, as epitomized by the teenaged girl who, distressed that boys do not ask her out because she was born without a nose, asks Miss Lonelyhearts whether she should kill herself. Some critics suggest that West's comic style derives from the surrealist movement of the 1920s, which, in the fine arts, was exemplified by Salvador Dalí. The Dream Life of Balso Snell most clearly reflects the influence of surrealism in West's fiction, its disjointed narrative mimicking the random chaos of dreams.

Nathanael West's macabre cynicism repelled many contemporary readers. During his lifetime, he sold few books and garnered little notice from the critics. In recent decades, however, his fiction has been recovered, influencing several writers, including Matt Groening, creator of The Simpsons, who has named his character, Homer Simpson, after a timid yet ultimately murderous bookkeeper in The Day of the Locust. Groening has brilliantly adapted West's bizarre parodist style for the 1990s.

Like many authors during the 1930s, including such notables as F. Scott Fitzgerald and Dorothy Parker, Nathanael West migrated to Hollywood in search of work. With the development of sound movies in the late 1920s and the 1930s, Hollywood provided ample opportunity for writers.

A screenwriter's career during the 1930s was hardly glamorous. Typically, a major studio, such as Paramount or MGM, would hire the authors, confining them daily in a cubicle and providing scenarios to be developed into dialogue. For this labor, an author might earn $300 per week. Nathanael West, an obscure novelist in his day and initially commanded a salary of $250 per week. Although, after a year, this was raised to $350 per week.

West worked regularly in Hollywood between 1936 and 1940, writing mostly formulaic melodramas, as well as a few socially conscious films, specifically The President's Mystery (1936) and It Could Happen to You (1937), and the brilliant sleeper, Five Came Back (1939), written in collaboration with Dalton Trumbo. Perhaps West's most acclaimed solo project was the thrilling crime drama, I Stole a Million (1939). Working cheerfully and busily, West enjoyed his indentured service in Hollywood.

Book cover, "Nathanael West: the Art of His Life"