"The prodigality that marks the simplest moments of [Moss Hart's] life is matched by the prodigality of his mind. Ideas pour forth, and the simplest things of life are highlighted and made interesting. His has an instinctive sense of drama, on and off [the stage]. Life, like the plays, cuts itself neatly into acts, with climaxes, second act curtains, and interesting minor characters."
-George S. Kaufman

One of America's premiere dramatists, Moss Hart, known as the "Byron of Brooklyn," wrote many celebrated musicals, plays, and films from the 1930s to the 1950s. Hart achieved his first success with the play Once in a Lifetime (1930), written in collaboration with George S. Kaufman. Following the play's popularity, Hart worked with Kaufman intermittently for the next ten years, writing a string of brilliant comedies, including the Pulitzer Prize-winning You Can't Take it With You (1936). A list of Hart's collaborators, including Irving Berlin, Ira and George Gershwin, and Kurt Weill, reads like a who's who of American theater.

In 1947, Moss Hart in 1947 wrote a provocative screenplay based on Laura Z. Hobson's novel, Gentleman's Agreement, because he was troubled by America's self-righteous assumption that "the Holocaust couldn't happen here." The film tells the story of a journalist, played by Gregory Peck, who pretends to be Jewish for six weeks in order to write an article about anti-Semitism in America. To his amazement, he encounters many expressions of prejudice, ranging from exclusion from restricted communities like Darien, Connecticut, to his girlfriend's temporary rejection of him, to the measures taken by his secretary to conceal her identity as a Jewish woman. When he completes his experiment, the journalist concludes that well-meaning liberals, who outwardly deplore bigotry, actually promote anti-Semitism by their social inaction.

Enjoying tremendous critical acclaim, Gentleman's Agreement was heralded by Time as "an almost overpowering polemical film" (November 17, 1947). It was praised by the New York Times as "courageous" and "sizzling" (November 12, 1947). Nominated in 1947 for seven Academy Awards, including best screenplay, it won the Oscar for best picture. Perhaps the most enduring legacy of Moss Hart's work on Gentleman's Agreement was the tradition of social-message films it initiated.

Despite Hart's continued success in the theater and in his personal life, he suffered from debilitating depressions. Hart was an early convert to psychoanalysis and saw a therapist most of his adult life. He incorporated some of his treatment into a 1941 musical entitled Lady in the Dark, the story of a female magazine editor, her therapy, and her dreams.

KUBIE: Tell me, Moss-have you forgotten that this is an anniversary?
MOSS: Anniversary?
KUBIE: You're beginning your 25th year of analysis today.
-George S. Kaufman

Ira Gershwin and Kurt Weill supplied the lyrics and music for this smash hit, which ran for two years on Broadway. It starred Gertrude Lawrence and introduced a young comic actor named Danny Kaye. The musical was among the first to deal seriously with the theme of mental health. "It presented a psychiatrist as a dignified, serious person," Hart wrote. "Before, he was always the comedian with the German accent and the pointed Van Dyke beard who, it turned out, was the one who was nuts all the time."

Although Hart had enjoyed successes with a number of collaborators, Lady in the Dark assuaged his fears of working without his friend and mentor Kaufman. Hart also directed the show, leading to a number of other directing assignments, culminating in his Tony Award-winning direction of My Fair Lady in 1956 and Camelot in 1960.

Moss Hart was happily married to actress Kitty Carlisle from 1946 until his death in 1961. 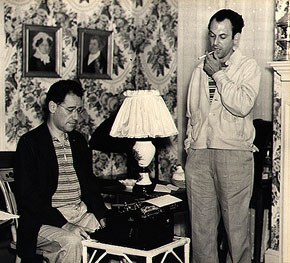 Connection to Bucks County
For Hart, Bucks County was an idyllic retreat from New York City where, surrounded by silence and $35,000 worth of trees, he could write. Between 1937 and 1954, Hart resided in Solebury Township, having purchased his home on a whim while visiting George S. Kaufman. Naming the eighteenth-century stone house Fairview Farm, Hart added tennis courts, a swimming pool, a two-acre terrace, and ample foliage. It prompted his guest, Alexander Woollcott, to quip, "Just what God would have done if He had the money."

Colleagues and Affiliations
John Hess, George S. Kaufman, Pearl S. Buck, Mike Ellis, Jerome Chodorov, Kitty Carlisle Hart, Oscar Hammerstein II, and John Root, who designed the set for George Washington Slept Here.
Hart was one of the original officers of the Bucks County Playhouse. He supported its creation in 1939. Hart performed in the Bucks County Playhouse production of The Man Who Came to Dinner in 1941 and 1946.

Film Adaptations of Plays
Once in a Lifetime, 1932
George Washington Slept Here, 1942
Winged Victory, 1944
Lady in the Dark, 1944
You Can't Take It With You, Academy Award for Best Picture
The Man Who Came To Dinner

Additional Plays
Lady in the Dark, musical score by Ira Gershwin and Kurt Weill, 1941
Christopher Blake, 1946
Light Up the Sky, 1949