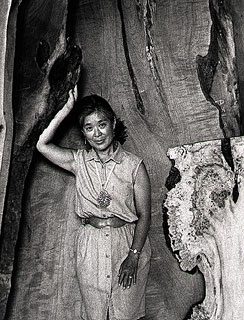 "Mira is not only maintaining her father's legacy and reputation but continuing his work in a literal hands-on sense."

Mira Nakashima was born in Seattle, Washington in 1942. As an infant, Nakashima and her family were moved to Idaho and placed into an internment camp. Antonin Raymond, a colleague of Mira's father, sponsored the family's release and invited them to his home in New Hope, Pennsylvania. While attending private school in Solebury, Nakashima was given the opportunity to develop her interest and skills in classical music, mathematics, and languages. She is an accomplished flutist and contemplated pursuing a variety of interests before focusing on architecture in college.

After graduate school, Nakashima returned home to Bucks County to work with her father, George Nakashima, the internationally known craftsman of wood furniture. After her father's death in 1990, Nakashima became Vice President, Designer, and Shop Supervisor at Nakashima Studios.

In addition to keeping her father's designs alive, Nakashima has her own catalog of works, Keisho, meaning continuation or succession. While her designs are reminiscent of her father's, it is obvious that she has taken it a step further by experimenting with new angles and structural details. She has designed sanctuary furnishings for St. George's Church in Titusville, New Jersey (1991-1992), the George Nakashima Memorial Reading Room for the Michener Art Museum (1993), and a flat seated musician's chair with a T-shaped back for the performers of the Concordia Chamber Players (2003).

Another project Nakashima worked on includes completing her father's vision of building and placing peace altars on the seven continents. The first was Peace Table, completed in 1986 while George Nakashima was still alive, and is located in New York City at the Cathedral of St. John the Divine. Nakashima has since overseen the installation of two more tables, located in India at the Unity Pavilion in the City of Peace, Auroville, (1996) and at the Academy of Art in Moscow, Russia (2001). The fourth table is to be installed in Cape Town, South Africa, at the Desmond Tutu Peace Center.

In September of 2008, Nakashima and brother, Kevin Nakashima, presented the Michener Art Museum with the Nakashima Archives. Guests were invited to witness a traditional Japanese tea ceremony in the Minguren Arts Building in honor of their father's legacy and the official signing of the Agreement for the Gift of Archives. Her works are presently on display in a new permanent installation at the Michener Art Museum entitled Intelligent Design, which opened in 2012. Additionally, Nakashima Looks: Studio Furniture at the Michener, which was guest curated by Nakashima, was on display through 2019.

Teachers and Influences
Mira Nakashima credits her father, George Nakashima, as her greatest influence. She also credits Mildred Johnstone as her mentor. Johnstone is a needlepoint artist who met when Nakashima was only two and introduced Nakashima to Japan, Zen Buddhism, Alan Watts, modern dance, and the tea ceremony.
Toshiko Takaezu, ceramic artist, and Alice Parrott, textile artist and weaver, were also her mentors. She credits the Zen Master Eido Tai Shimano for shaping her spiritual life, as well as Udar Pinto of the Sri Aurobindo Ashram.

Connection to Bucks County
While Nakashima was born in Seattle, Washington, she moved with her family to New Hope, Pennsylvania in 1943. She attended school locally, finishing high school at the Solebury School. After completing her graduate degree in Japan, she returned to New Hope at the invitation of her father. She worked alongside him at Nakashima Studios for twenty years until his passing in 1990. She then became Vice President, Designer, and Shop Supervisor of the business.