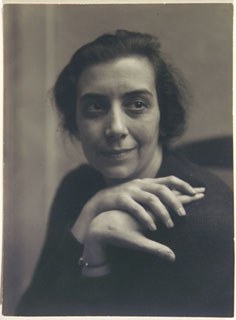 "Her best work seems almost artless in its avoidance of visual drama and effects, in its rigorous dependence upon the basic elements of light, line, surface, and composition..."
-Ben Lifson and Richard Eldridge

Marjorie Content (Toomer), the daughter of a wealthy New York stockbroker, joined the managerial staff and later became a partner in The Sunwise Turn, a Manhattan bookstore devoted to new writing and thought (1919-1921). It was the first bookstore founded and run entirely by women. After the breakup of her first marriage to editor and publisher Harold Loeb, she met and later married Michael Carr, a painter and set designer. While working with Carr as a costume designer for Broadway productions and avant-garde playhouses, she was inspired to take photographs. She produced a body of work that, according to her biographers, "seemed to record not an objective but a poetic truth."

When Carr died of pneumonia in 1927, Content continued her photography, living in New York and occasionally camping across the country to the Southwest with her children and Gordon Grant, a painter who introduced her to various Native American tribes. During one of those summers (1934), she drove from Chicago to New Mexico with Georgia O'Keeffe, a close friend. Her photographs were first published in Photographie magazine in 1932. In 1934, Content was commissioned by the Department of the Interior to photograph Native American life. She married Jean Toomer in New Mexico that year. In 1935 they settled on a farm in Doylestown, Pennsylvania, where a number of interests, including her husband's work and her progressively deepening involvement with the Society of Friends, gradually took her away from her photography.

Connection to Bucks County
Marjorie Content moved to Mill House Farm in Doylestown with Jean Toomer in 1935, where she lived until her death in 1984. They purchased the farm at the suggestion of Marjorie's friend, the woodworker Wharton Esherick. When Content took her summer trips to the Southwest, she always spent the first night with Esherick in Paoli, Pennsylvania. In her words: "We always admired Bucks County. When Jean wanted to leave New York permanently we began looking around in this area, on Wharton's suggestion. It was as simple as that." She later devoted her energies to supporting her husband's work, and to receiving the community of people who gathered around him. She became a Quaker after moving to Doylestown and was actively involved for many years with the Doylestown Meeting House and Buckingham Friends School. She got involved in the town and county community theater as a character actor.

Commissions
Commissioned by the Bureau of Indian Affairs (which came under the Department of Interior) to photograph Native American life, 1934.