At the age of 16, Margaret Mullen was pulled from her high school history class to begin her professional stage career in the English melodrama The Ghost Train, when she was asked to go as the female lead, a role she was understudying. She played the role for three months. She then toured with William Hodge's Road Company for 3 years. She appeared on Broadway in seven George Abbott comedies including Ladies' Money, Three Men on a Horse, and Room Service. She took on a more serious role as Kay in Sidney Kingsley's celebrated hit Dead End (1935-36). In 1937 she opened in the Broadway production of Red Harvest and met set designer John Root. On their days off they escaped to Bucks County and soon fell in love with each other and the area. Margaret Mullen Root continued her acting career at the Bucks County Playhouse in New Hope where she appeared in virtually every season and many acclaimed productions from 1947 to 1969. She returned to Broadway in 1965 to appear in Anya. She considered her role in Frank D. Gilroy's The Subject Was Roses (1967), a Bucks County Playhouse production which was staged at the Bucks County Prison as entertainment for the inmates, her most fulfilling and gratifying appearance of her long career. 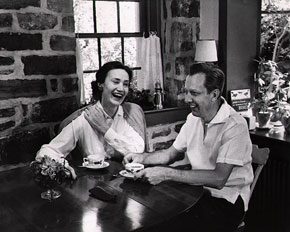 Connection to Bucks County
Escaping to Bucks County on their days off from the Broadway production Red Harvest, Margaret Mullen and set designer John Root soon fell in love with each other and the area. They married in Doylestown on one of their days off and later settled in Wycombe, Pennsylvania. After Margaret Mullen Root moved permanently to Bucks County in 1946 with her husband, John Root, she became a regular performer at the Bucks County Playhouse. With a number of Broadway credits under her belt, she charmed the Bucks County theatergoers with her presence in virtually every season from 1947, in The Barretts of Wimpole Street, to 1969, in Macbeth. Her performance in Magnificent Yankee (1956) opposite Jerome Cowan received particular acclaim. Her years there offered her rare and exciting opportunities such as acting on-stage with Thorton Wilder in his Pulitzer Prize winning play The Skin of Our Teeth (1948). She charmed her local audience with her much in-demand poetry readings which she performed around Bucks County.

Major Theatre Performances
Margaret Mullen performed in many George Abbot productions, including Ladies Money, Three Men on a Horse, and Room Service on Broadway in the 1930s. She appeared in Sidney Kingsley's Dead End from 1935-36 as well as Thornton Wilder's Skin of Our Teeth and Our Town at the Bucks County Playhouse in 1953 and 1964. She enjoyed great success in Magnificent Yankee in 1956 opposite Jerome Cowan. She appeared in virtually every season at the Bucks County Playhouse from 1947, ending with her last show, Macbeth, in 1969.

Teaching and Professional Appointments
She managed a radio program for the advancement of mental health.

Affiliations and Memberships
She was affiliated with the Bucks County Playhouse, Wrightstown Meeting, and Linghochen Fire Company. She was active and in demand for poetry reading in Bucks County. She read at Sara Seegar's funeral in Newtown and for many years at the Wrightstown Friends Meeting House.