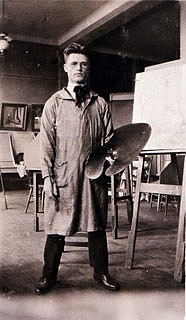 Louis King Stone is known for his abstract, non-objective paintings. While most of his work is oil on canvas, he also experimented with gouaches in earlier paintings, using them in a range from thin washes to opaquely applied mixtures of color with white. His style fluctuated between flat, decorative abstraction and more fluid, spatial ordering of planes. Stone's later work, following a trip to Mexico in 1950, exhibits vibrant colors with firmly controlled designs in which the shapes are more solid and spatially organized. A native of Ohio, Stone studied at the Cincinnati Academy of the Fine Arts. He later studied with abstract expressionist Hans Hofmann in Germany and France. While abroad in 1935, Stone met New Hope painter Charles Evans, who convinced him to move to Bucks County, where they became colleagues in the group known as the Independents. The group was an offshoot of the New Group of modernist painters that had formed in 1930 as a response to the conservatism of the impressionists and their juried shows at Phillips' Mill. In 1938, Stone, Evans, and Charles Ramsey started the Cooperative Painting Project, a visual "jam session" held every Thursday afternoon, at which the three artists would collaborate to produce a single painting under the joint name "Ramstonev."

Stone traveled through, and lived in, Europe from 1927 until 1933. In 1928, Stone and Charles Evans, painted in Paul Cezanne's former house and studio in Aix-en-Provence, France. In 1929, Stone traveled to Germany and studied under Hans Hofmann at the Hans Hofmann School of Fine Arts in Munich.

Connection to Bucks County
At the suggestion of his friend, Charles Evans (whom he had met while they both were studying under Hans Hofmann in St. Tropez), Stone and his wife, Caroline Morris, moved to New Hope in 1935. The couple later moved to Lambertville, New Jersey.

Colleagues and Affiliations
Stone and Lloyd Bill Ney were good friends. Both were breaking new ground as modernists at a time when modern art was not enthusiastically received in the New Hope area. Stone was also happy to have fellow modernists Charles Frederick Ramsey and Charles Evans for partners as well as friends. His other colleagues from the group of Independents included Peter Keenan, R.A.D. Miller, Ralston Crawford, B.J.O. Nordfeldt, John Nevin, Lee Gatch and Elisie Driggs. Stone opened the Cooperative Art Gallery in New Hope. Stone and his wife, Caroline Morris, founded an art school in Jacksonville, Florida, prior to moving to the New Hope area. They had a home on Coon Path in Lambertville, New Jersey, that was built by architect Antonin Raymond in 1937.