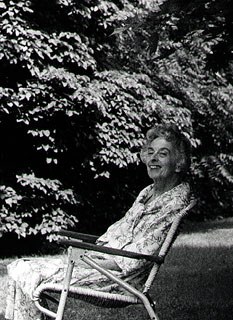 "Lenore Marshall makes much less noise than many of her contemporaries, so we must tune ourselves to listen to her modulated voice before we can begin to realize its distinction and authenticity."
-Stanley Kunitz

Lenore Marshall, a long-time resident of New Hope, was a novelist and an intensely personal poet who often wrote about individuals attempting to bring order and unity to their lives.

Marshall channeled her creative energy into political activism in the 1950s. With Clarence Pickett and Norman Cousins, Marshall founded the National Committee for a Sane Nuclear Policy in 1956 and continued her anti-nuclear work through the 1970s with the Committee for Nuclear Responsibility. Her efforts helped bring about the test ban treaty between the United States and the Soviet Union.

As an editor at Cape and Smith, Marshall was instrumental in persuading her employers to print The Sound and the Fury by William Faulkner. She also edited As I Lay Dying and a third book by Faulkner.

Marshall had three poetry books published. Also, her poetry appeared in many magazines, such as Harpers and The New Yorker. She wrote three novels, including The Hill Is Level (1959), and published two anthologies.

Her last work, Invented A Person: The Personal Record of a Life, was published posthumously in 1979.

Teachers and Influences
John W. Gofman, Senator Charles Goodell, and Muriel Rukeyser
Marshall worked as an activist with James J. Wadsworth for the limited test-ban treaty.
Marshall came from a Jewish background and later (likely in the 1940s) joined the Quakers.

Connection to Bucks County
Marshall and her husband, James Marshall, lived in Solebury, Bucks County. He served on the Board of Education in New York City for seventeen years and served as president of the board for several years. James was one of the first people to call for the creation of UNESCO during World World II. He also wrote about law, psychology and education.

The Lenore Marshall Poetry Prize was created by the New Hope Foundation after she died. The foundation was established by the Marshalls some years before her death to support the arts and the cause of world peace. The poetry prize is still being awarded.

Records
Spoken Arts produced a record of her poetry, read by Lenore Marshall

Teaching and Professional Appointments
Literary Editor, Cape and Smith, 1929-1934
She was instrumental in persuading her employers to publish The Sound and the Fury by William Faulkner. Additionally, she edited two other novels by him.

Affiliations and Memberships
Founder (with Clarence Pickett and Norman Cousins) and member of Executive Committee: National Committee for a Sane Nuclear Policy, 1956
Founder and co-chairman (with John Gofman and Charles Goodell), Committee for Nuclear Responsibility, 1971
Founder, The New Hope Foundation, 1960s
Lenore Marshall Poetry Prize, established by the New Hope Foundation after Marshall's death, presently awarded jointly by the Academy of American Poets and The Nation

Lenore Marshall in Front of her Solebury home