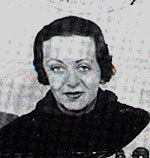 Laura West met S.J. Perelman through her brother, Nathanael West, in 1928 when she was seventeen years old. They were married in 1929. On their honeymoon they visited the expatriate community of American writers in Paris, a journey which became the inspiration for their first collaboration as a writing team.

The play All Good Americans opened in 1933 and was made into the movie Paris Interlude a year later. Unfortunately, the play nor the movie were critically successful. From 1931 to 1942, Laura and S.J. Perelman collaborated on two plays and many screenplays, establishing themselves as one of Hollywood's screenwriting husband-and-wife teams.

They worked for Paramount, MGM, Columbia Pictures, and 20th Century Fox, together commanding a salary of $1,000 a week (a definite financial advantage over writing alone). Their more successful movies were Ambush, 1939, a film about a bank robber and his gang, and Boy Trouble, 1939, a family drama. The play, The Night Before Christmas, 1941, was about burglars tunneling into a bank vault. It opened on Broadway in 1941. After a short run, it was made into the movie Larceny, Inc. starring Edward G. Robinson.

While Laura and S.J. eventually stopped writing together, she was still influential on her husband's work. Laura was known for her wit and helped S.J. with his humorous stories. She died of cancer in 1970 at the age of fifty-eight. S.J. is said to never have fully recovered from her death, and he sold the Erwinna farm that same year to move to England.

Connection to Bucks County
Laura and S.J. Perelman bought a farm in Erwinna, Pennsylvania, on Geigel Hill Road in 1931 with Laura's brother, writer Nathanael West. They named the farm "Eight Ball." Laura maintained a very close relationship to her brother, and she was devastated by his premature death in an automobile accident in California in 1939. S.J. sold the Erwinna farm after Laura's death in 1970.

Writer Josephine Herbst wrote a story about Laura and Nathanael West's relationship, which was not well received by the Perelmans.

Laura participated in the Tinicum Arts Festival and was active at the Bucks County Playhouse.

Screenplays
In collaboration with S.J. Perelman:
Paris Interlude, adapted from their play All Good Americans, 1934
Florida Special, with David Boehm and Marguerite Roberts, 1936
Ambush, 1939
Boy Trouble, 1939
The Golden Fleecing, with Marion Parsonnet, 1940
Larceny, Inc., based on the play The Night Before Christmas (1941), 1942

Plays
In collaboration with S.J. Perelman:
All Good Americans, 1933
The Night Before Christmas, 1941

Laura with Gherky in Hollywood