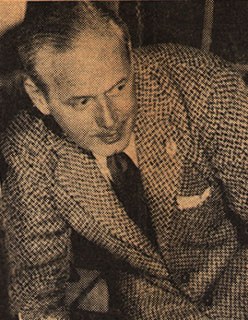 Playwright and screenwriter Kenyon Nicholson's first Broadway success was The Barker (1927), which also provided Claudette Colbert with her first successful role. He was a master collaborator who worked mostly in conjunction with other writers. He worked simultaneously on works from the Broadway stage while writing screenplays for studios such as MGM, Paramount and 20th Century Fox. In Hollywood, he wrote several films for Joan Crawford. His 1933 stage hit, Sailor Beware, was made into the 1939 musical comedy film, Nice Goin'!. Nicholson also served as editor of Hollywood Plays (1938) and The American Scene (1930). He adapted They Knew What They Wanted (1946) for radio and was a regular writer for the radio programs The US Steel Hour and The Theater Guild of the Air. Nicholson was one of the early officers of the Bucks County Playhouse assisting with promotion and productions. Two of his plays were produced there as well. He later opened a bookstore in New Hope which has since become Farley's Bookshop.

Connection to Bucks County
Nicholson came to the New Hope area in early 1940. He was considered one of the writers of the Bucks County "Genius Belt" and settled across the river in Stockton, New Jersey. He was one of the original officers of the Bucks County Playhouse, and in association with Theron Bamberger, he promoted their summer theater productions. He persuaded St. John Terrell to start the Music Circus in Lambertville, New Jersey. After spending some time in Australia during World War II, he returned to work with Bamberger at the Playhouse, where his plays Apple of His Eye (1947) and The Gilded Cage (1948) were produced. Kenyon Nicholson owned a bookstore on Stockton Street in New Hope, which he later sold to James Farley who moved it to its present location on Main Street in New Hope.

Colleagues and Affiliations
St. John Terrell, Theron Bamberger, Mike Ellis, Charles and Fredericka Child, John Folinsbee, Donald Walker, and many other writers and performing artists in the area
One of the original subscribers and an officer of the Bucks County Playhouse

Teaching and Professional Appointments
Professor of Playwriting at Columbia University, 1924-1929
Chairman and Fellowship Committee of the Dramatist Guild, 1938-1941

Affiliations and Memberships
Dramatist Guild
ALA