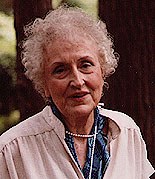 "'Woman Washing Her Hair' was his favorite piece, and though he had seen only pictures of it, he wanted it.
-Jo Jenks on her relationship to Willhelm Reich, Offshoots of Orgonomy III

Josefa Ben-Shmuel was a sculptor and graphic artist for thirty years under her maiden name of Jo Jenks, before marrying fellow sculptor and teacher Ahron Ben-Shmuel. She did direct carving in onyx, granite, and alabaster and also worked in bronze, plaster, and ceramics. She is known primarily for portraits and female nudes, or "rock women," as she called them. Active in the Progressive Education Movement, she helped found the Mount Kemble School in Morristown, New Jersey and taught art there until 1937. She also taught at Columbia and Temple Universities. Jenks was a serious student of Jungian child psychologist Frances G. Wickes, and she later joined the Wilhelm Reich movement and sculpted the bronze bust of Reich that adorns his tomb in Maine. After her marriage to sculptor Ahron Ben-Shmuel in 1961, she changed her medium to weaving, under the name Josefa Ben-Shmuel. Her tapestries were done on a high vertical loom, by hand and with the help of a simple dinner fork, by tightly pressing fine strands of wool over finely twisted cotton warp to combine color and texture, similar to the medieval technique known as Gobelin.

Connection to Bucks County
Jo Jenks lived in Bucks County from 1945 to 1954. She moved to Ottsville in 1945 when she married her second husband, Hugh Tyson. The goats that she raised as a child and in Bucks County appeared in at least one of her sculptures. In the 1950s, she was a member of the New Hope Workshop with Pulitzer Prize-winning poet Stanley Kunitz and had a home and studio on Mechanic Street. She worked as a sculptor in New Hope, Morristown, New Jersey; Woodstock, New York; and New York City. She and her third husband, sculptor Ahron Ben-Shmuel, married in 1958, and the couple moved to Jerusalem in 1968 to retire. After their divorce, Josefa Ben-Shmuel returned to the United States in 1975 and continued her career as a textile artist. She is known as Jo Jenks as a sculptor and as Josefa Ben-Shmuel as a weaver.

Colleagues and Affiliations
Jenks was a close friend of writer Jean Toomer, author of Cane, and his photographer wife, Marjorie Content. Toomer also participated in the New Hope Workshop, a series of informal seminars that began in 1953 and had grown out of the success of Stanley Kunitz's modern poetry seminars of the previous year. The Workshop offered different courses to groups of twenty-five people and met on Friday nights in Jo Jenks' studio and in the home of other artists. Others involved were writer Josephine Herbst and architect Jules Gregory. Sculptor Ibram Lassaw and his wife Ernestine were also close friends of Jenks.

Jo Jenks first studied under sculptor Ahron Ben-Shmuel in 1932. They re-met in 1958 after Jo Jenks had left Bucks County and moved to New York. They married and later moved to Israel for retirement. Jo Jenks, a.k.a. Josefa Ben-Shmuel, returned to the States after their divorce in 1975. Ahron Ben-Shmuel stayed in Jerusalem, where he died in 1983.