"No one ever met Jo and then forgot him. Wherever he was, his vibrant personality pervaded. He was tremendously gifted for the work he did. He was intelligent, incisive, witty, a marvelous raconteur. His enthusiasm was endless. He hated everything mean or intolerant."
-Harry Rosin

Jo Davidson had an international reputation as a portrait sculptor who captured in bronze such notables as Frank Sinatra, Will Rogers, Ghandi, Albert Einstein, and Presidents Woodrow Wilson and Franklin D. Roosevelt. Working in a bold naturalistic style, he sculpted the portraits of many important international heads of state including General Pershing, Mussolini, Prime Minister of Israel David Ben Gurion, and President of Israel Chaim Weizmann. Fascinated by the personalities behind world events, he said his sculpted portraits "became an obsession." Davidson once said, "I do my interviews in clay and bronze. I consider my portraitures as comments on people that sit for me." Davidson's career in sculpture began in New Haven where he was enrolled in the Yale School of Medicine, switching to the School of Art after his first patron, a New Haven lawyer, showed Davidson's drawings to the head of the school. Davidson was invited to attend Yale's art classes without charge, and he soon discovered his love for working in clay. In 1910, Davidson had his first solo show, and he exhibited regularly around the country and the world. In 1947, the American Academy of Arts and Letters held a retrospective of almost two hundred of Davidson's works. 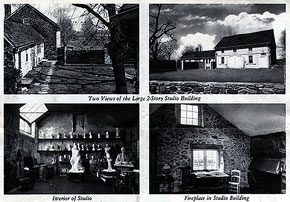 Teachers and Influences
The art of the middle ages, notably the metal worker Cellini

Connection to Bucks County
Jo Davidson had a farm in Lahaska on Stoney Hill Road from 1940 to 1948.

His figure of Walt Whitman was exhibited in the Third Sculptural International Exhibition sponsored by Fairmount Park Art Commission in Philadelphia in 1949. It stands near the approach to the Walt Whitman Bridge.

One of his friends was Harry Rosin, who wrote as a tribute to him after his death: "Jo lived here near New Hope for about seven or eight years-leaving for Paris three years ago. He adored Bucks County and always asked for everyone when I'd see him, or if he wrote me. When he and his wife, Florence, came to town to shop, it was like a beautiful spring day for all the people they talked to. Everyone who knew him will feel what my little daughter said when she heard the news over the radio, 'I'm so sorry, Dad.'"

Colleagues and Affiliations
His second wife, Gertrude Florence Lucius, was a painter and a sculptor. Davidson was acquainted with Harry Rosin, and he and his wife visited often with architects and designers, Antonin and Noemi Raymond. 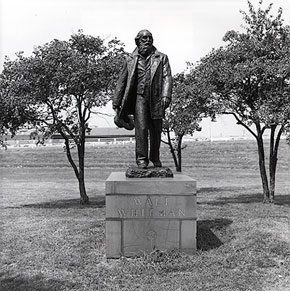