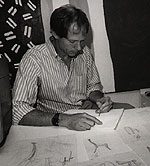 "A part of me is attuned to structure, function and practicality. Another part is an artist responding to impact, feel 'rightness.' If a design is good, there is a balance of these factors. If it is great, there is a marriage of them and the distinction between the art and structure is no longer apparent."
-Jeffrey Greene

Woodworker Jeffrey Greene has been designing and creating furniture since the 1970s. Greene earned a master's degree in psychology from Fairleigh Dickenson University and then turned to furniture design and building. Influenced by three generations of artists, including his father, painter and sculptor George Greene (who is represented in the Guggenheim Museum's permanent collection), Jeffrey Greene is known both at home and abroad for his creation of original pieces of furniture. His style is characterized by the use of interlocking pegs and joints and by his use of rare solid woods. His first studio in New Hope was designed and built by Greene himself and has been featured in Gourmet and in the fine furniture tour schedule of Smithsonian Magazine.

In addition to the design and creation of original pieces of furniture, Greene has conducted an apprentice program as part of his studio since the mid 1970s. His furniture is represented in collections throughout the country and abroad. In 1998, his works were exhibited as part of Bucks County Invitational II: Contemporary Woodworkers at the Michener Art Museum. Jeffrey Greene is also a painter and sculptor and has exhibited his work at the Annual Juried Art Exhibitions at Phillips' Mill in New Hope. His piece Double Windsail Bench is in the permanent collection of the Michener Art Museum.

Connection to Bucks County
Jeffrey Greene attended and graduated from the Solebury School outside New Hope. He grew up near Phillips' Mill where his father, painter and sculptor George Greene lived. Greene has lived and worked in Bucks County since the early 1970s.

Colleagues and Affiliations
James Martin, Phillip Lloyd Powell, among others
Greene has conducted an apprentice program as part of his studio since the mid-1970s. The Greene and Greene Gallery, formerly in New Hope and now in Lambertville, New Jersey, is a joint venture of Jeffrey and his wife, Valerie Greene.

Teaching and Professional Appointments
Jeffrey Greene conducts an apprenticeship program for aspiring artisans in his studio with a focus on fine furniture making and design. This program has continuously been a part of his studio since the 1970s and has trained a number of artisans.