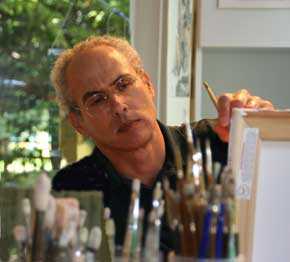 "Art is my life's work. There is nothing more important to me than truth in pursuit of beauty. I'm a filter for Nature. I absorb scenes from the world, process them through my head and heart and place them back with my understanding and feeling stamped on them. Every painting I create is an expression of how I feel about life in its totality."
-Jan Lipes

Jan Lipes is a self-taught painter who works in the Pennsylvania Impressionist style. He paints mainly in oil, and his subject matter is the landscape of the area in and around Bucks County, Pennsylvania and Hunterdon County, New Jersey, particularly scenes along the Delaware River. In 1991, after being diagnosed with multiple sclerosis and leaving his career as a physician, Lipes began painting. His subject matter follows the Pennsylvania Impressionist tradition of depicting local buildings, trees, hills, and the river or canal, though his rendering often presents a heightened expressiveness through a bold color palate and hundreds of visible brushstrokes that comprise the work. Formerly a plein air painter, Lipes currently paints in his studio in Bucks County, working from his sketches of local scenes. Lipes has had numerous exhibitions and has won several awards for his work, including a show at The Newman Gallery in Philadelphia and the Sienkiewicz Award for Traditional Painting in the Style of the New Hope School from The Phillips' Mill 72nd Annual Juried Exhibition. He exhibits annually at the Gratz Gallery in New Hope.

Jan Lipes in his Studio, 2004. Image courtesy of the artist.

Connection to Bucks County
Jan Lipes and his wife Janet moved to Solebury in 1981. Lipes worked as an emergency physician at Doylestown Hospital until 1991, when his battle with multiple sclerosis made it impossible for him to continue his work as a physician, and he turned to painting full time.

Shad Fishing on the Delaware