"What I want to do is present stuff in the form of true experience, the happenings of living life as I have found them to happen."
-James Gould Cozzens

Acclaimed for his novels and short stories, author James Gould Cozzens wrote about moral duty and the search for values in a style of exacting realism. In his commitment to writing truthfully from experience, Cozzens sought out new places, people, and occupations, traveling throughout the Caribbean and Europe. His military service during World War II provided him with material for his Pulitzer Prize winning novel, Guard of Honor (1948), which concerned a young general's dilemma when confronted by racial discrimination. His bestseller, By Love Possessed (1957), drew upon his experience in the Bucks County-Lambertville area, where he spent a great deal of time researching the legal profession. Cozzens' novels often take place in a short period of time, probing the moral complexities raised during that duration. The style of his mature fiction is succinct, precise, and unsentimental, even ironic. Cozzens also submitted short fiction and essays to such distinguished periodicals as the Atlantic Monthly and the Saturday Evening Post, and wrote manuals for the United States Air Force during World War II. Raised in New England and New York, Cozzens spent 25 years in Lambertville with his wife, Sylvia Bernice Baumgarten Cozzens, a successful literary agent

Connection to Bucks County
James Gould Cozzens and his wife, successful literary agent Sylvia Bernice Baumgarten Cozzens, lived at Carrs Farm on Goat Hill Road in Lambertville from 1933 to 1958. He wrote several of his major novels there, including the bestseller By Love Possessed, which was set in the Lambertville-Bucks County area. Cozzens enjoyed absorbing the small-town atmosphere of the region and collecting data for his fiction at the Bucks County Courthouse in Doylestown and in nearby Flemington, New Jersey. Although Cozzens socialized in Lambertville, New Hope, and Doylestown, he was a somewhat solitary figure. Mike Ellis, the former Bucks County Playhouse owner and producer, recalled, "He wasn't a recluse... but we didn't know him." 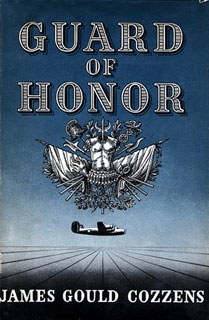 Poetry
Contributed poems to The Quill, and the Harvard Advocate, 1922-1923

Affiliations and Memberships
National Institute of Arts and Letter, member

"If your great-grandchild should ever want to find out how Americans behaved and thought and felt in the mid-years of this century, Cozzens' major novels probably would be his most revealing source."
-John Fischer, Harper's, August 29, 1956

John Fischer said of James Gould Cozzens that he knew the Doylestown court house better than its janitor did. Cozzens spent many hours there, observing trials and conversing with attorneys, judges, and jailers, all in pursuit of the realism he strove to capture in his fiction. The result of this diligent research was By Love Possessed (1957), the story of two days in the life of lawyer Arthur Winner and his associates in an old Lambertville-Bucks County community. Focusing upon crises in the lawyers' interpersonal relationships, the novel observes how passionate love governs the behavior of all people, especially those who profess to be most rational. Like most of Cozzens' fiction, By Love Possessed probes complex questions of morality.

The book, a best seller, established Cozzens' widespread popularity and was even adapted for film. Reader's Digest condensed it, and it was, like several of Cozzens' previous novels, a Book-of-the-Month Club selection. Many critics praised it, but John Fischer of Harper's was so enthusiastic that he even nominated Cozzens for the Nobel Prize. By Love Possessed earned its author the prestigious William Dean Howells Medal of the American Academy of Arts and Letters. The novel's popularity stemmed in part from its portrayal of small-town American life, which Cozzens observed in his own backyard in Lambertville, New Jersey.