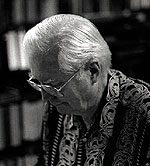 J. P. Miller is the author of several historically based television dramas including a dramatization of the Lindbergh kidnapping case. He is perhaps best known for his adaptation of the book based on the life and crimes of Charles Manson, Helter Skelter, which won the Edgar Allen Poe Award in 1976. He won an Emmy in 1969 for The People Next Door and a special award from the Mystery Writers of America for Your Money or Your Wife in 1974. The movie, The Days of Wine and Roses, starring Jack Lemmon and Lee Remick was nominated for an Oscar in 1962. Miller first began to write for television in the medium's infant stages, regularly supplying scripts for television plays. Many of Miller's characters are drawn from his personal experiences, including a stint as a professional boxer under the name "Tex Frontier," a foreign news correspondent in Mexico, an instructor of creative writing, and even a refrigerator salesman.

Prior to settling down in the Bucks County region, Miller had a distinguished Navy career as a lieutenant serving in the South Pacific during World War II, where he earned the Presidential Unit Citation, Purple Heart and Bronze Star.

At the time of his death, Miller was at work on an autobiography at his home in Stockton, New Jersey, where he had lived since 1965.

Connection to Bucks County
J.P. Miller was truly a native to this region. He lived in a 200-year-old restored farmhouse in Stockton, New Jersey, from 1965 until his death in 2001. Miller's children attended the Friends School in Buckingham, and he was a regular at the Swan Hotel in Lambertville. Additionally, his novel, The Skook, is set in the Lambertville/New Hope area.

Major Awards
Presidential Unit Citation, Purple Heart, Bronze Star
Academy Award Nomination for The Days of Wine and Roses, 1962
National Academy of Television Arts and Sciences Emmy Award for The People Next Door, 1969
Mystery Writers of America Special Award for Your Money or Your Wife, 1974
Edgar Allen Poe Award for the film adaptation of Helter Skelter, 1976