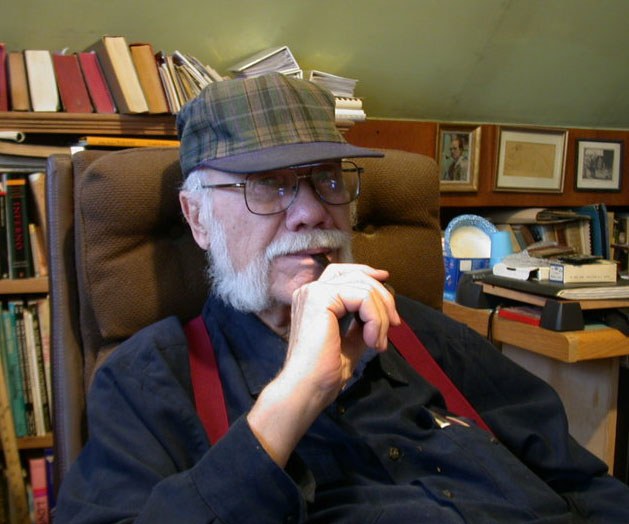 "One never knows the gems one will discover when facing a blank page, an insecure pencil or pen in hand, and the forces of fate confronting them."
-Herbert Mandel

Artist Herbert Mandel was a painter, printmaker, sculptor, and poet, born in Philadelphia in 1925. In 1948, Mandel received a full scholarship to the Philadelphia Museum School of Industrial Art, now the University of the Arts. He majored in painting and spent one academic year at the Barnes Foundation as an art history major.

After serving as an illustrator for the Army Signal Corps, Mandel later attended Temple University Tyler School of Art as an education and sculptor major, receiving a B.F.A. and B.S. in education. Later, he taught commercial art at the newly opened Bucks County Technical School, retiring after 41 years of service.

Mandel's work focused on a collection of biblical art. He imagined and rendered stories that span both the Old and New Testaments in ink illustrations, linoleum block carvings, and most comprehensively, in his large-scale oil paintings. His work tells a story of the historic record as described in the Jerusalem Bible, his primary reference.

He also wrote original poetry to compliment his collections, which he compiled into book form. Mandel has written and illustrated several books of poetry, including Slowly Through Limbo, Revelation to John, The Greatest Story, The Great Passion, and To Catch a Butterfly.

He developed a technique called "Spiroleander," a term combining the words "spiral" and "meander," which he described as a method similar to stream-of-consciousness writing. Through the technique, the artist essentially creates the basis for his or her work with a series of free-form spirals from which the finished work evolves.

Mandel wanted to provide fellow art educators with a blueprint for using Spiroleander in the classroom as a medium to create fresh and unexpected work. To that end, he has written and assembled a text book aimed at teaching the method to others.

Education and Training
B.A. in Painting, Philadelphia Museum School of Industrial Art (now University of the Arts) and one academic year at the Barnes Foundation as an art history major, Philadelphia, Pennsylvania, 1948

Influences
Pablo Picasso
Georges Seurat
Rembrandt van Rijn
Connection to Bucks County
Herbert Mandel moved to Bucks County in 1953. In 1958, he began working at the Bucks County Technical School, as a commercial art teacher. He finished his career there as an administrator, retiring in 1999. Mandel had several works displayed through the years in juried exhibitions in New Hope, Doylestown, Langhorne, Bensalem, and Philadelphia.

Mandel wrote and illustrated several books of poetry, including The Greatest Story, A Philadelphia Story, Slowly Through Limbo, Revelation to John, The Great Passion, and To Catch a Butterfly.

Later in his life, Mandel developed a technique called "Spriroleander." He created a detailed manuscript describing how it unlocks the artistic process, creating a teachable stream-of-consciousness technique.

The process allows the artist to create meandering lines on drawing paper, which transform into a patter of shapes. The shapes are roused from images locked deep within the recesses of the mind, creating a mosaic of everyday moments juxtaposed against fragments of imagination.

One Night In Sodom