Henry Hudson Baker was active in the New Hope Modernist movement of the 1930s. Born in Dunkirk, New York in 1900, he graduated from Yale University in 1923 and went on to study at the Art Students League in New York City. His close friend, Ralston Crawford, another New Hope Modernist, introduced him to the Barnes Foundation in Merion, Pennsylvania. At the Barnes, he met a Pennsylvania Academy of Fine Arts student, Edith Wood, who told him about the New Hope community. Baker came to New Hope in 1932 and first exhibited at the Phillips' Mill exhibitions. He was an original member of the Independents, the modernist group which had stemmed from the New Group, a group of artists which had seceded from the Phillips' Mill Community Association due to its conservatism. His work was exhibited with two other Independents, Peter Keenan and Lloyd Ney, at the Mellon Galleries in Philadelphia under the direction of Philip Boyer in the 1933 Little International Show. He was a resident of New Hope until 1950. Baker died in New York City in 1957.

Connection to Bucks County
Ralston Crawford, a close friend of Baker, brought him to the Barnes Foundation in Merion, Pennsylvania. There he met Edith Wood, a student at the Pennsylvania Academy of the Fine Arts. She suggested he visit New Hope. Baker arrived in New Hope in 1932 and lived there until 1950, when he moved back to New York.

Colleagues and Affiliations
Independents and the Modernist community of New Hope: Charles Child, Charles Evans, Robert Hogue, Peter Keenan, R.A.D. Miller, John Nevin, C.F. Ramsey, Richard Rogers and Faye Swengle
He exhibited with Lloyd Ney at the Mellon Galleries in Philadelphia.
Ralston Crawford, another New Hope modernist, was a close friend.
Baker was one of the original stockholders for the Bucks County Playhouse. 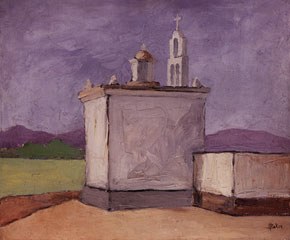