Harry Haenigsen was a cartoonist and illustrator for more than 60 years. At the height of his career, his cartoons and illustrations appeared in 600 newspapers and magazines worldwide. He began as an illustrator and columnist for the New Evening World in 1919, and thereafter his work was seen in Photoplay, Motion Picture, the New York World, and was distributed by the King Feature Syndicate. He covered the Lindbergh kidnapping trial for the New York Herald Tribune. Haenigsen created such popular comic strips as Simeon Batts, Penny, and Our Bill. Among these, Penny, which was created in 1943 and published internationally, was most popular. Focusing on the life lessons of a thirteen year old girl, it spawned a play and a television production, for which Haenigsen wrote the script. He also authored two Penny books and one based on the Our Bill strip. 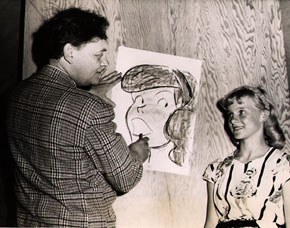 Connection to Bucks County
Harry Haenigsen first moved to Lumberville in 1931 with his wife Bobby (stage name Jeanette Kerr), but they stayed only briefly. They came back to the Solebury-New Hope area in 1939 and lived in Lambertville, New Jersey, just across the river from New Hope and in Ivyland. Haenigsen was director of the renowned Bucks County Playhouse and the Playhouse Inn, New Hope, which was started by Donald Walker and Odette before she opened Chez Odette. He was also director of the first Lambertville Art Shad Festival in 1981 and that same year he published a shad cookbook.

Colleagues and Affiliations
Harry Haenigsen's first wife Bobby, was an accomplished singer and dancer. She worked with George M. Cohan and as a soloist with John Phillip Sousa, using the stage name of Jeanette Kerr. Her tragic death in a car crash in 1968 also spelled the end of the Penny and Our Bill strips as far as Haenigsen was concerned. (They were drawn by other artists until 1973.) Haenigsen married the painter Ellen Hall in 1971. Bill Ney was a friend, and Haenigsen was associated with many in local theater scene, such St. John Terrell, in his capacity as director of the renowned Bucks County Playhouse and the Playhouse Inn.

Photograph of Harry Haenigsen by Maynard Clark. James A. Michener Art Museum. Gift of Philip A. and Dianna T. Betsch.