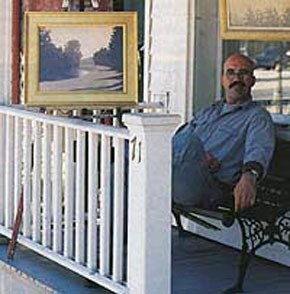 "When I paint I use color theories from the French Impressionists, using transparent layers for depth and richness of color."
-Gordon Haas

Beginning in 1985, Gordon Haas worked in New York on illustrations for book jacket covers, children's books and magazines. After about five years, he decided to paint full time. Haas paints landscapes of Bucks County, France and Italy in oil on panel. He uses color theories similar to the French Impressionists for developing mood. By using the layering techniques of the Dutch masters, he is able to achieve visual depth in his work. He sketches and paints in his studio and on location. Haas runs art galleries in Lambertville, New Jersey and New Hope, Pennsylvania, showcasing his art.

Gordon Haas at his Lambertville gallery. Image courtesy of the artist.

Education and Training
Gordon Haas received his B.F.A. in illustration from the Rhode Island School of Design in 1984. His mentors/teachers include Chris Van Allsburg and Nicholas Palermo.

Connection to Bucks County
Haas has lived for many years in New Hope and has operated his own Gallery, showing exclusively his own paintings, since 1993.

Colleagues and Affiliations
Haas considers Alan Fetterman and Robert Beck as his colleagues.

Snow on the Canal