Called a "founding father of the American popular theater," George S. Kaufman was one of Broadway's most successful playwrights. Known as a consummate collaborator, he penned all but two of his 40 (plus) plays with other writers, including Edna Ferber, Marc Connelly, George and Ira Gershwin, Richard Rodgers and Lorenz Hart.

Among these plays, his most renowned include Of Thee I Sing (1931, Pulitzer Prize), You Can't Take it With You (1936, Pulitzer Prize), and The Man Who Came to Dinner (1939). His favorite partner was Moss Hart, with whom he first collaborated on Once In A Lifetime (1930). Kaufman also directed and played a featured role in this comedy.

Kaufman was a distinguished director who directed many of his own plays, as well as productions by others, including, The Front Page (1928), Of Mice and Men (1937), and Guys and Dolls (1950). He also served as drama editor for the New York Times from 1917 to 1930 and wrote articles for a variety of publications, including The New Yorker and The Nation. He was a prominent member of the famed Algonquin Round Table, a colorful group of writers that dominated New York's cultural scene in the 1920s. Both his private and professional lives were marked by quiet generosity. He was a renowned "play doctor," yet he often took no credit for work that he helped to shape.

Plays
Dulcy, with Marc Connelly, 1921
The Cocoanuts, with Irving Berlin, starring the Marx Brothers, 1925
The Royal Family, with Edna Ferber, 1927
Animal Crackers, with Morrie Ryskind, starring the Marx Brothers, 1928
Strike Up the Band, with Ryskind, music by George and Ira Gershwin, 1930
Once in a Lifetime, with Moss Hart. Kaufman also performed in and directed this play which won the Roi Copper Megrue Comedy Award, 1930
Of Thee I Sing, with Ryskind, music by the Gershwins, directed by Kaufman and was first to win a Pulitzer Prize, 1931
Dinner at Eight, with Ferber, 1932 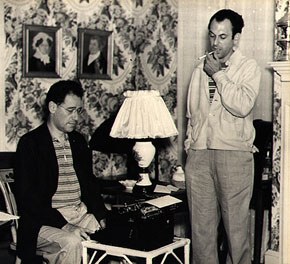 Known as "the great collaborator," George S. Kaufman teamed up with a range of celebrated playwrights and composers, including Marc Connely, Moss Hart, the Gershwins, Rodgers and Hart, and Edna Ferber, to create some of the most memorable plays of his day. Indeed, Kaufman only wrote two of his 40 (plus) plays alone. Confessing that he needed company when locked in a room with a blank piece of paper, Kaufman may have also preferred collaboration because it gave him the opportunity to bounce ideas off his partner. Kaufman, in turn, offered his collaborators the benefit of his enduring sharpness.

Among Kaufman's many collaborators, the ebullient young playwright from the Bronx, Moss Hart, was his favorite. Fifteen years younger than Kaufman, Hart revered him more than his own father. Beginning with the stunningly popular Once in a Lifetime in 1930, they wrote eight plays together, including, most notably, the Pulitzer-Prize-winning You Can't Take It With You (1936), as well as The Man Who Came to Dinner (1939) and George Washington Slept Here (1940). Hart expressed his gratitude in the eulogy he delivered at Kaufman's funeral, citing his own- and all of American theater's- "incalculable debt" to George S. Kaufman. 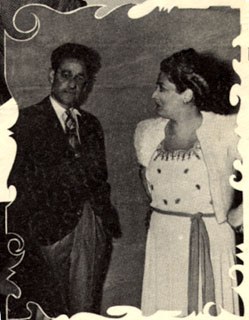 Teachers and Influences
George Kaufman greatly admired the works of Mark Twain. Kaufman's mentor was Franklin Pierce Adams, who helped Kaufman secure early writing jobs at the Washington Times in 1912, and the New York Tribune in 1914.

Artistic Community
Kaufman was an original member of the Algonquin Round Table, a circle of writers and critics who met at the Algonquin Hotel in New York from 1919 until the end of the 1920s. Members included Dorothy Parker, Robert Benchley, Robert Sherwood, and Alexander Woollcott.

Connection to Bucks County
"Kaufman Joins Literary Back-to-Soil Movement," shouted the headline when the playwright and his wife, Beatrice, purchased Barley Sheaf Farm on Lower York Road in Holicong, Bucks County in 1936. Kaufan nicknamed the estate "Cherchez la Farm" and wrote more than thirteen plays there, including the script for Of Mice And Men, the product of his collaboration with John Steinbeck. In Bucks County, he enjoyed the company of several authors and theatre personalities, including Harpo Marx. Alexander Woollcott, Lillian Hellman and Moss Hart, many of whom joined Kaufman for intense games of croquet. After the death of his wife Beatrice in 1945, Kaufman married English actress Leueen MacGrath in a ceremony at Barley Sheaf Farm in 1949. He sold the farm in 1956.

Kaufman's experiences in Bucks County inspired two plays, The Man Who Came to Dinner and George Washington Slept Here, both written with Moss Hart. The former, based on a visit by critic Alexander Woollcott, concerns an injured, imperious house guest who refuses to leave, while the latter comically portrays the frustrations involved in refurbishing a Bucks County estate. During the late 1930s and the 1940s, several Kaufman plays were staged at the Bucks County Playhouse, including You Can't Take It With You (1939, 1942), The Royal Family (1940), and George Washington Slept Here (1941, 1944). When The Man Who Came to Dinner was first staged there in 1941, Kaufman even acted in the performance, alongside Moss Hart and Harpo Marx.

Intimidated by the Marx Brothers' reputation for neglecting their scripts in favor of wild improvisation, George S. Kaufman nearly refused their request to write a play for them. In spite of his misgivings, Kaufman collaborated with the Marx Brothers on three occasions: writing the plays The Cocoanuts and Animal Crackers and the film A Night at the Opera. Typically, he contributed urbane witticisms, as well as a storyline and comic situations, leaving the Marx Brothers to flesh out the performance with their madcap humor.

In his scripts for the Marx Brothers, Kaufman often incorporated social satire, targeting especially the airs of the rich. Animal Crackers, for example, ridiculed the pretentiousness of guests at a posh Long Island house party. Among the many absurd house guests was a gentleman who claimed to be a fearless big game hunter until it was discovered that he faints at the sight of a caterpillar. His was the classic Marx Brothers line, "One day I shot an elephant in my pajamas. How he got into my pajamas I'll never know."

Kaufman's cynicism and the Marx Brothers' outrageously antic humor played off each other brilliantly. Kaufman became accustomed to the Marx Brothers straying from the original script. Once, while checking on one of their shows, Kaufman turned to Alexander Woollcott and said, "Shh, I think I hear one of my original lines."