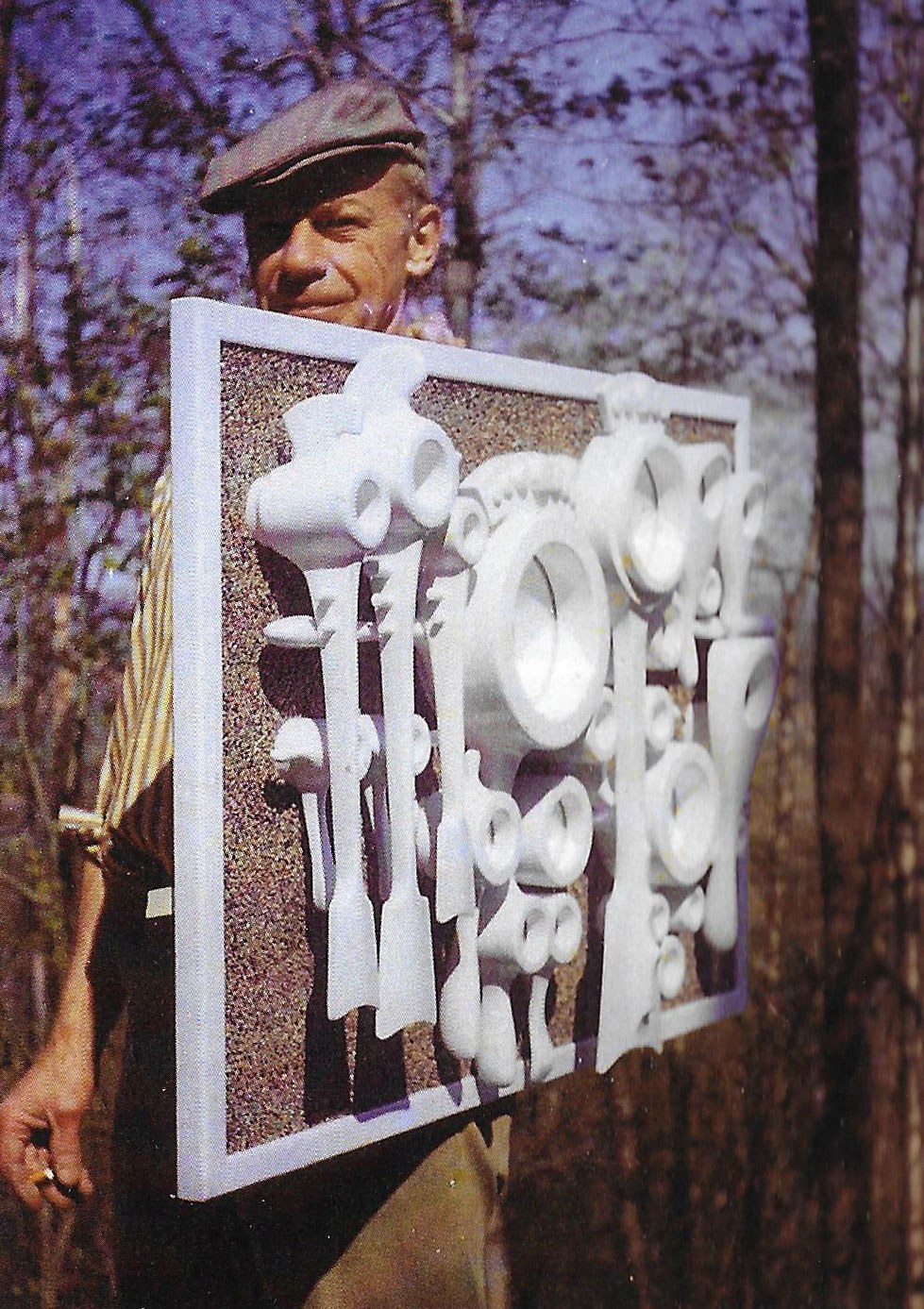 Ponstingl’s time serving in the U.S. Air Force during World War II and the Korean War simultaneously turned him against the horrors of war and ignited his obsession with technological advancement. The 1950s-1970s witnessed the exploration of space, the digital revolution, the invention of the atom bomb and the advancement of nuclear energy. Paralleling these technological trends, Ponstingl’s work prominently features molecular structures and mutation, machinery and automation, and dystopic landscapes. Ponstingl was further motivated by Salvador Dalí’s explorations into art and the unconscious. While the surfaces of his paintings are carefully rendered to give the illusion of realism, his compositions contain ambiguous figures and dreamy landscapes that unsettle observable reality.

In the 1950s and 1960s, Ponstingl experimented with transforming three-dimensional space. He completed several large murals on the interior walls of the Bolling Officers’ Club, where he worked intermittently. Ponstingl also completed interior design projects at The Monocle, a restaurant and popular dive for government employees, as well as the Carousel Club hotel in Ocean City, Maryland. In between projects, Ponstingl traveled back to his family farm in Pennsylvania where he spent weeks at a time painting.

After the passing of his father in 1968, Ponstingl traveled through Europe, the Middle East, Africa, and South America. Inspired by the archaeological ruins and artifacts of Inca and Maya cultures, his work turned toward abstraction, organicism, and geometric motifs.

In 1969, frustrated by his lack of career success, Ponstingl donated the bulk of his work to a Philadelphia Salvation Army and moved to the West Coast, where he would live until his death in 2004. In the meantime, the Bucks County art dealer Robert Baum (1907-2005), son of painter and educator Walter Baum (1884-1956), collected Ponstingl’s work from the Salvation Army and frequently showed it alongside Maya artifacts and contemporary art, including in the exhibitions Sunset 2000 A.D. (1974) and 500 B.C. to Utopia 1984 (1984). Today, Ponstingl’s inciteful perceptions of the ravages of war and technological advancement continue to resonate with contemporary experience.

Franz Jozef Ponstingl's work was showcased during the exhibition, Rediscovering Ponstingl, at New Hope Arts in New Hope, Pennsylvania in 2017. His work also debuted during Rediscovering Ponstingl: Visions of the Extraordinary at The Baum School of Art in Allentown, Pennsylvania, in 2016. He was showcased at the James A. Michener Art Museum in 2016 during the exhibition, Death of Impressionism: Disruption & Innovation in Art?
Collections
Michener Art Museum
Private colletions