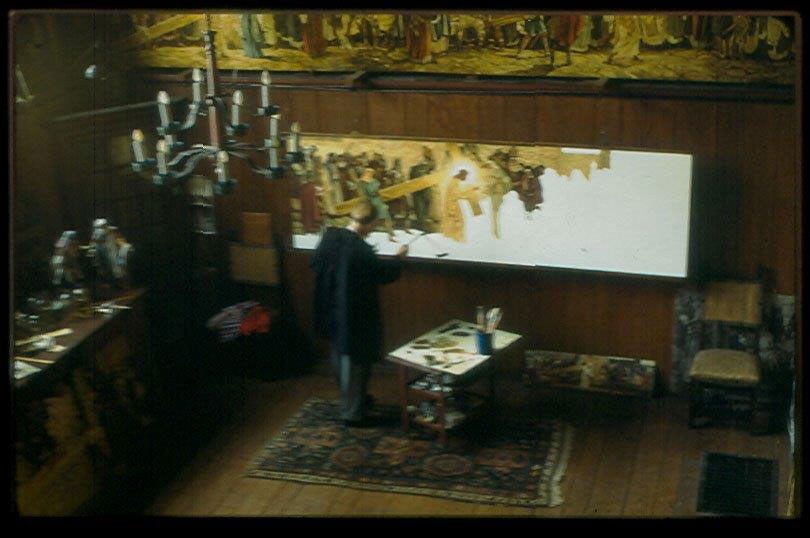 "To express in paint the drama of the moment in such a way as to permanently provide an inspiration for others was a challenge. If I have done that, I am happy."
-Forrest C. Crooks on painting murals for St. Gregory's Church

Forrest C. Crooks was an illustrator, stained glass craftsman, and a painter. He was born in Indiana in 1893 and moved to his grandparent's farm in Michigan as a child. Crooks knew he wanted to be an artist at a young age.

Crooks found his passion for illustrating while at the art school of Carnegie Institute of Technology, now Carnegie-Mellon University. There he studied under George Sotter, a renowned Bucks County artist. Later in his life, Crooks went on to work with Sotter in his George W. Sotter Studios in Holicong, Bucks County, Pennsylvania.

Crooks earned his way through school by taking on commercial art assignments and graduated in 1917. Knowing he wanted to become a magazine illustrator, he moved to New York City to make his way into the New York magazine scene. While in New York, Crooks worked in the art department of Architectural Record and also attended the Art Students League.

In 1918, he married Irene Phelps, and continued to make ample illustrations, showing them to art directors. He landed a job with Scribner's magazine, sparking his successful career. Crooks went off to work at magazines such as Cosmopolitan, Redbook, The American Legion Monthly, Good Housekeeping, and The Saturday Evening Post. During his career as an illustrator he worked for writers such as Irvin S. Cobb, Fanny Hurst, Rudyard Kipling, and Winston Churchill.

While working for magazines, Crooks designed dioramas of scenes for advertisements and magazine covers, before the years of four color photography. While in New York City, Heart Publishing Company offered him a contract to work for them exclusively, and he took it.

In 1925, he moved from Manhattan to Carversville, Bucks County. There he found a deserted house on 70 acres in Solebury, Bucks County. He bought the house and turned a barn on the property into a studio. Upon moving to Bucks County, Crooks worked at George W. Sotter Studios as a draughtsman and a stained glass designer. Crooks went on to design stained glass and painted murals for churches.

While in Bucks County, Crooks left his mark, through designing the George School arts building in Newtown, Pennsylvania, writing and illustrating his own articles, developing a successful Christmas tree farm and nature preserve, and painting murals and designing stained glass under George Sotter.

Crooks studied illustration at Carnegie Institute of Technology, now Carnegie-Mellon University, under George Sotter.
He later attended the Art Students League in New York City for a short time, then went on to work at major magazines.
Connection to Bucks County
Crooks and his family lived and worked at Tuckamony Farm in Solebury Township, Bucks County. The house was previously Peg Tucamony's home, one of the last Native Americans to live in Bucks County. Crooks started one of the first Christmas tree farms in Bucks County, which is still active today.
He helped establish the Honey Hollow Watershed Association, in order to preserve farmland.
Crooks and George Sotter were close friends and Crooks worked at the George W. Sotter studio upon moving to Bucks County. Crooks executed manyof Sotter's commissions, including the mural, The Way of the Cross, in Los Angeles, California. He was also friends with other stained glass artists of the Bucks County region, including Valentin D'Ogries, Ed Byrne, and Alice Sotter.
Affiliations & Memberships
Honey Hollow Watershed Educational Association

Publications
Crooks' illustrations were featured in magazines such as Cosmopolitan, Redbook, The American Legion Monthly, Good Housekeeping, Architectural Record, and The Saturday Evening Post.
He also wrote and illustrated his own article,"The Hobby-Loom," highlighting the weaving looms he designed from his Crooks-Crafts business in Solebury, Pennsylvania.
The book, Yesterday, 1982
The Original Crooks' Book: The life and talents of Forrest and Irene Crooks, compiled by Malcolm and Elaine Crooks

The Hobby-Loom Article and Illustration

Way of the Cross Panel Two