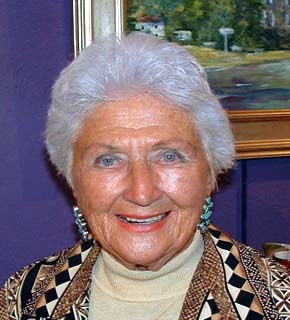 "Her canvases show no hesitation. Ms. Faherty knows exactly what she is doing. Her bold, vibrant brush strokes and fluid colors capture the essence of the scene. Her works are filled with restless energy, a rhythm of movement where nature is in constant flux and the river never stops to flow."
-Franc Bianco of Bianco Gallery, Evelyn A. Faherty obituary

Painter Evelyn A. Faherty drew much of her influence from the Pennsylvania Impressionist school of painters. She was one of the few living local artists with direct ties to this group, and the impact is evident in her style, color choice, and subject matter. Even though she did not know him, Edward Redfield was her greatest inspiration. Faherty also studied and painted with Harry Leith-Ross for several years and was invited to paint with John Folinsbee.

Many of her paintings include scenes of Pennsylvania farms, Harbourton, the Delaware Canal, and the sea coast. Her work is impressionistic, painted in oil, watercolor, and pastel. Though painting was her primary focus, she also worked in sculpture and batik. Her love of the Hopewell Valley, the Delaware River, and Bucks County is evident in her paintings. She exhibited extensively in Bucks County and New Jersey. Faherty passed away on January 7, 2015.

Teachers and Influences
Faherty studied and painted with Harry Leith-Ross, John Folinsbee, and George Brown in the 1970s in Bucks County, Pennsylvania. Though she did not know him, her greatest inspiration was Edward Redfield.

Connection to Bucks County
The artist was raised in the central New Jersey region. She moved to the Yardley area in 1977. Faherty and her husband owned and operated the Circle Package Store in Pennington, New Jersey. Later she divided her time between Sarasota, Florida, and Yardley, Pennsylvania.

Colleagues and Affiliations
Harry Leith-Ross, John Folinsbee, Ben Badura, and Faye Swengel Badura
Exhibited with Charles Hargens at the Upstairs Gallery in the 1970s
Purchased frames by the dozen for Ben Badura and sometimes used the frames for her paintings
Represented by Biano Gallery
Frequent exhibitor at the Phillips' Mill Annual Juried exhibition in New Hope, PA

Teaching and Professional Appointments
For a five year period, Faherty instructed patients at a hospital in Trenton, New Jersey. She also taught the elderly in Sarasota, Florida.

Affiliations and Memberships
Hilton Leach and the Visual Arts Gallery in Sarasota, Florida

On the Towpath, Fall