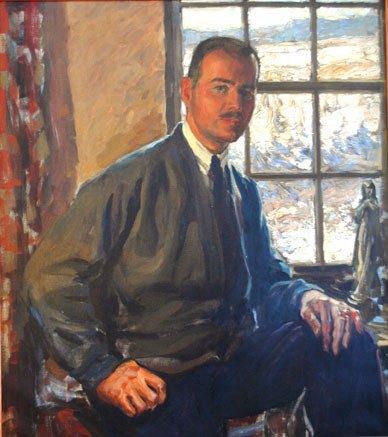 "The design must be subservient to the building that is to house it."
-Edward J. Byrne

Edward Joseph Holslag Byrne was a prominent stained glass window designer in Bucks County and the surrounding areas. Born in Pittsburgh, Pennsylvania in 1898, he was one of ten children of Patrick Joseph Byrne and Rose Gahan Byrne. Byrne's father (also known as P.J. Byrne) was instrumental in starting the art school at Carnegie Tech and supported several artists that eventually gained notable recognition. Byrne attended the Cathedral School in Pittsburgh, as well as Saint Francis College in Loretto, Pennsylvania, and Carnegie Tech School of Fine Arts in Pittsburgh.

In 1923, one of Byrne's teachers, George Sotter, moved to Bucks County from Pittsburgh to start the Sotter Studio in Holicong. Byrne followed and assisted in starting the studio, where the two artists created commissions, primarily of stained glass windows, for churches. Many of these churches were in the Bucks County and surrounding areas, however, he received commissions from churches in states such as West Virginia, Connecticut, Michigan, South Carolina, and Louisiana. One major commission was for the Sacred Heart Church in Pittsburgh.

In 1933, Byrne and Sotter split. Sotter continued with his studio, and Byrne opened his own studio in Carversville called the Edward J. Byrne Studio. The studio was often located at various spots within Carversville: a small church on Aquetong Road, the three room school at Aquetong and Saw Mill Roads, and the barn at the Byrne farm on Saw Mill Road. Besides continuing commissions for stained glass windows, Byrne also became well known for church design, murals, and sanctuary furnishings and appointments. In 1950, Byrne moved to a new studio that he built on Cherry Lane in Doylestown, Pennsylvania. The Edward Byrne Studio continued to operate under his son, Edward Byrne Jr. (1933-2017).

Connection to Bucks County
In 1923, Byrne and Sotter moved to Bucks County from Pittsburgh to start the Sotter Studio in Holicong. After splitting with Sotter in 1933, Byrne began his own studio, the Edward J. Byrne Studio, in Carversville. It moved in 1950 to Cherry Lane in Doylestown. Many churches in the Bucks County area feature his work.