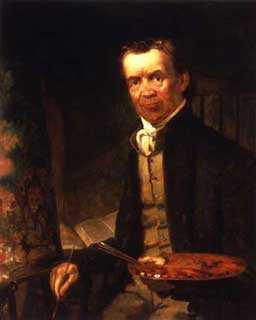 "The highest art a man can practice in his community is the art of peaceable living."
-Edward Hicks

For Edward Hicks, a devout Quaker, painting was a means to achieve in himself, and in his viewers, the profound spiritual peace he so highly prized. Since his preaching yielded little income, Hicks also painted in order to earn "an honest living." Trained as a coach and sign painter, Hicks achieved immediate success in his field. He regarded his art, which he began in midlife, as an extension of his craft, painting pictures, as well as signs, on commission. Typically, Hicks painted in oil on wood or canvas. Hicks specialized in Biblical scenes, especially Peaceable Kingdoms inspired by Isaiah, and historical paintings and panoramas of Bucks County farm life. His style was naive, rendering animals and human figures in realistic detail, while handling perspective awkwardly.

"The wolf shall with the lambkin dwell in peace,
His grim carnivorous thirst for blood shall cease,
The beauteous leopard with his restless eye,
Shall by the kid in perfect stillness lie;
The calf, the fatling and the lion wild,
Shall all be led by one sweet little child."
-Edward Hicks

Edward Hicks's painting expresses his profound Quaker faith. A preacher, Hicks earned a reputation for his fervor and temper, on one occasion storming out of the meeting house when a pompous congregant challenged his authority. Hicks' paintings of Peaceable Kingdoms illustrate his unswerving Quaker ideals, as well as his changing preoccupations. Based on a verse in Isaiah, these paintings portray the lion and the ox lying down together in peace, guided by a young child who, according to Christian tradition, prefigures Christ. This scene foretells the attainment of paradise on earth. His early Peaceable Kingdoms feature William Penn's treaty with the Indians in the background, suggesting that this accord, achieved by a Quaker, created an earthly paradise. When he became embroiled in a schism between Quaker factions, Hicks replaced this image with an image of Quakers bearing banners, expressing a plea for peace among the Friends. Hicks' later renderings of Peaceable Kingdoms accentuate the lion's strain as he lies down and eats hay with the ox. The torment in the lion's countenance, which resembles Hicks' own, symbolizes the artist's inner struggle against his proud, sensual, and fiercely temperamental nature. It is no wonder that Hicks, long tortured by this conflict, found the idea of a peaceable kingdom, both internal and external, to be profoundly appealing.

Hicks was also interested in historical painting, which grew out of his vocation as a minister. He chose as his subjects, the most heroic moments in early American history, and presented them as inspiring examples for his audience to emulate. An appreciation for historical painting and a tendency to idealize the past were common during the early nineteenth century. Compared to contemporary history painting, however, Hicks was more homiletic in its conception.

"While virtue, liberty and independence continue to be esteemed among the children of men, the name Washington will be pronounced with veneration and respect by millions of intelligent people."
-Edward Hicks

Hicks painted the wisest, most principled American heroes at their most glorious moments. William Penn, a fellow Quaker, was Hicks' favorite subject. The artist often painted Penn's treaty with the Indians. Hicks also portrayed several heroic episodes from the Revolutionary era, most notably George Washington crossing the Delaware and the signing of the Declaration of Independence, the latter of which particularly suited Hicks' Quaker outlook because it was a democratic, and not a military, achievement. Hicks believed that history, like Scripture, was capable of teaching its readers important moral precepts. As he thought, art was the most emotionally and intellectually powerful medium by which to convey the ethical lessons of history.

Although Hicks lacked formal training as an artist, he taught himself in the same manner favored by many academies, which was by copying earlier paintings or etchings. Indeed, most of Hicks's paintings were based on engravings. It was not until the twentieth century that many of Hicks' paintings were discovered, elevating his stature as an artist. Today, he is regarded as one of the greatest American naive painters.

Education and Training
Apprenticeship to coachmaker William Tomlinson, Langhorne, Pennsylvania, 1793-1800
Self-taught painter through copying other works of art and working from nature

Connection to Bucks County
Born in Attleborough, now Langhorne, Hicks spent his life in Bucks County, where he worked as a coach and sign painter and a Quaker minister. His first sign, a portrait of Benjamin Franklin for the Newtown Library Company, was so highly esteemed that he was hired to execute many more throughout Bucks County, some of which are still extant. Convinced that agriculture was a holier endeavor than painting, Hicks tried farming for two years. Fiercely independent in his approach to art, Hicks associated with few colleagues, although he taught his younger cousin, Thomas Hicks, as well as Martin Johnson Heade, both of whom became distinguished regional artists.

Affiliations and Memberships
He was affiliated with a group of Friends (Quakers).

Penn's Treaty with the Indians