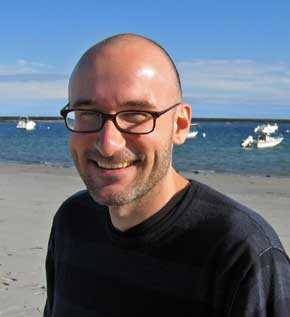 "Our minds, hearts and imaginations offer up bits and pieces that speak to each other. Mine speak to yours; yours speak to theirs, the world over. The personal belongs to us all, is shared by all here where we share the same thoughts, memories and pasts. These are the painted counterparts of an unseen world we all know."
-Colin Hunt

Colin Hunt paints subjects such as barns, railroad tracks, and pure landscapes. On the other hand, his painting On the Surgery of Spyglasses, is commenting on the exhibits of a Natural History Museum sometimes being unnoticed. This painting is a way to preserve what "may collect dust."

Although he was born, raised, and educated in New York, Hunt has recently moved to the Bucks County Area and embraced the surroundings. He says he wants "to represent this landscape as it is, how people live here today and how the history of the area blends into that representation."

He paints using oils on small panels. This enables him to carry his supplies to wait for inspiration rather than expecting a painting to happen.

His work has won several awards including the Bucks County Landscape Oil Painting Award in 2007 from the Phillips' Mill Annual Exhibition in New Hope.

Connections to Bucks County
Colin Hunt lives, and paints in the Bucks County area. He has moved from New York to settle in Pipersville, PA with his family. He uses the Bucks County landscapes as inspiration for his paintings.His father is the painter Peter Hunt. They can be seen painting side by side and have also exhibited together at one time. Colin's work has been displayed in New Hope and in Lambertville, and has won several awards including the Bucks County Landscape Oil Painting Award and the Hughes Award. He is also a member of the Artsbridge organization.

Near the Frenchtown Bridge

On the Surgery of Spyglasses