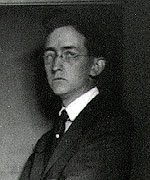 "[Charles Sheeler] gives you a factual painting- whether it be a waterwheel, an airplane, a locomotive or a maze of machinery- but he gives you a bright and shining conception at its moment of utter and immaculate perfection; at that precise moment when the slanting shafts of a benevolent sun put things in their very best light."
-Grace Pagano

A leading modernist, Charles Sheeler was one of the few artists to earn recognition as both a painter and photographer. Trained as a painter, Sheeler turned to photography in 1910 in order to earn a living. He worked as a free-lance photographer in Philadelphia and, subsequently, in New York, hired by the prestigious publishing firm of Conde Nast. Sheeler's work as an art photographer influenced his painting, cultivating his interest in architectural subjects and abstract geometric form. Intrigued by strong lines and abstract form, Sheeler drew inspiration from traditions as diverse as European cubism and African sculpture. As a painter, Sheeler led the development of Precisionism, a movement that began in the 1920s that distilled industrial subjects into simplified geometric forms. Sheeler's work from the 1920s to the 1950s established his reputation as a Precisionist painter of urban and industrial scenes, as well as rural barns and floral still lifes.

"The dominant trend in America of today, beneath all the apparent chaos and confusion, is towards order and organization which find their outward sign and symbol in the rigid geometry of the American city....By using an underlying mathematical pattern, the artist could create a new expression of optimism."
-Louis Lozowick

Stimulated by European abstraction, especially cubism, American painters during the 1920s adapted it to an American idiom. Perceiving industrialization and urbanization to be uniquely American trends, these artists abstracted industrial landscapes by reducing them to their essential geometric forms. With clean, precise lines, these artists painted factories, bridges, skyscrapers, and airplanes, all emblems of modernity. Typically, these paintings excluded people, as well as any suggestion of motion or change, yielding a sometimes haunting effect of solidity and stasis. The leaders of this movement, known as Precisionism, were Louis Lozowick, Elsie Driggs, Charles Demuth, and, most importantly, Charles Sheeler.

In his Precisionist paintings, done from the 1920s through the 1950s, Sheeler captured the underlying abstract structure of various familiar objects, ranging from smokestacks to flowers. One of his most acclaimed paintings, Upper Deck, conveys the pure form of a ship's instrumentation through its almost photographic realism of detail, the interplay of geometric shapes, and the skewed, eccentric perspective. Sheeler also painted Bucks County barns in Precisionist terms, for example in Family Group, reducing the buildings to stark red rectangular forms against a white ground. The diversity of Sheeler's subjects reveals the depth, as well as the breadth, of his Precisionist vision.

"Throughout his career, Charles Sheeler was both haunted and sustained by the architecture of Bucks County."
-Karen Davies

The clean lines and pure geometric forms of eighteenth-century architecture and Shaker furniture, so prevalent in Bucks County, appealed to Charles Sheeler. Driven to capture the abstract form of Doylestown interiors and architecture, Sheeler developed into an art photographer. He often photographed the interior of the fieldstone farmhouse he rented, Worthington House, shooting black and white images of doors and corners, stairwells and windows. The absence of people in these photographs, combined with the unusual angles of Sheeler's shots, accentuates the subjects' geometric shape. Sheeler's increasing interest in abstraction is apparent in his contemporary photographs of Bucks County barns.

Sheeler's creative process, as he shot original photographs of Doylestown interiors and barns, prepared him to paint these same subjects, often years later. Before Sheeler photographed a site, he pondered it deeply, figuring its essential structure. Over time, Sheeler would refine his conception, ultimately capturing the abstracted form in painting. His masterpiece, The Artist Looks at Nature, comments upon this process, depicting Sheeler, seated outdoors, painting his earlier Interior with Stove from memory. Through this painting, Sheeler celebrates Doylestown's powerful hold upon his imagination.

Major Films
Sheeler made three films early in his career. One that remains today is Manhatta, which he made with photographer Paul Strand in 1920.