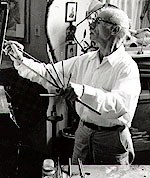 "Solowey's brilliant and productive art career was based on an affinity with life and an awareness of all that was around him."
-Virginia Castleton

Ben Solowey defies easy categorization. He had an international reputation for his canvases, watercolors, and drawings in a wide variety of genres and styles, yet was part of no school or movement. In 1919 at an exhibition judged by Edward Redfield, Solowey was awarded a scholarship to the Pennsylvania Academy of the Fine Arts. Upon moving to Manhattan in 1928, Solowey was commissioned by The New York Times and Herald-Tribune to capture the performing arts in New York. Solowey drew from life his subjects, such as Katharine Hepburn and Laurence Olivier, and his nearly 900 charcoal portraits played an important role in introducing the use of halftone to newspaper reproduction. At the same time, his paintings were exhibited regularly at such institutions as the Metropolitan Museum of Art, alongside those of Picasso and Matisse. At the height of his acclaim for both his paintings and his theatre work, Solowey moved to Bucks County, where he would create some of his greatest work, even though the first seven years he would be without electricity and running water on his property. He proved to be a true Renaissance man, creating award-winning canvases, while at the same time building furniture, frames, and restoring the colonial farmhouse.

Teachers and Influences
At the Pennsylvania Academy of the Fine Arts: Hugh Breckenridge, Daniel Garber, Henry McCarter
According to Solowey: "Looking back to art school calls to mind a strong influence upon me of the French. They, through Delacroix, Courbet, the Impressionists and the Moderns, injected fresh air into painting....If some of my work shows a preference for greyed tones in color, I am undoubtedly influenced in my work by the choice of colors which surround me."
Informal instruction on cabinetry from Henry Schlesinger, New York City

Connection to Bucks County
In 1942, at the height of his acclaim for both his paintings and his theatre work, Solowey left the comforts of Fifth Avenue for the countryside of Bedminster, Pennsylvania, where he and his wife had purchased a farm six years earlier. Solowey restored the colonial farmhouse on the 34 acre farm, furnishing it with his own recreations of classic furniture he admired in museums. He taught at the New Hope Fine Arts Workshop, Allen Lanes Art Center, Lansdale Art League, as well as at his studio. In addition to solo shows, his work was seen regularly at the annual Phillips' Mill exhibitions, and was included in the Bucks County Travelling Art Gallery. Solowey was commissioned to paint an oil portrait of the founder of the Shrine of Czestochowa. After Solowey's death, his wife Rae insisted that his unique studio remain intact for the public to enjoy. Interpretive exhibitions of Solowey's work and his contemporaries are mounted at the Solowey studio today. 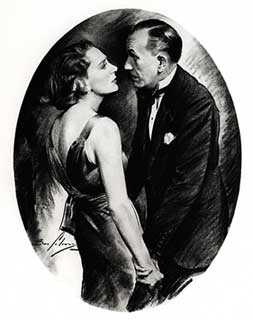 "I know that the bigger the people were, the nicer they were to work with."
-Ben Solowey

Commissioned by The New York Times and The Herald Tribune, Solowey defined an era in his striking charcoal portraits of the luminaries of the performing arts. Unlike many artists in the field, he insisted on working from life, often visiting the theater during a rehearsal to delineate the performer either right on stage (frequently under a bare light bulb), or in an actor's dressing room. Because of performers' hectic schedules, Solowey sometimes had only minutes to capture the essence of his subject and the character they were portraying. Later performers took the opportunity to visit the Solowey studio on 5th Avenue in Greenwich Village where the artist could work undistracted. He was one of the first artists to introduce halftone to newspaper reproduction. He chose charcoal because of its quick response to his hand, and preferred strong light to make an indelible mark on the page and reduce the possibility of error in reproduction. To be drawn by Solowey was a sign that a performer had "arrived," and his portraits were eagerly awaited each week by both performers and newspaper readers.

Commissions
From 1929 to 1942, Solowey was commissioned primarily by The New York Times and The Herald Tribune to draw nearly 900 charcoal portraits of performers, directors and producers from the theater, film, and opera. Throughout his career, he was compared to John Singer Sargent, and was commissioned to paint or draw portraits in oils, watercolor, pastel, and charcoal of a number of individuals. Commissions included J. Edgar Hoover, Eleanor Robson Belmont, founder of the Metropolitan Opera Guild, and Lessing Rosenwald (portrait now in the National Gallery of Art, Washington, D.C.).
Public collections which include Solowey portrait commissions:
The Metropolitan Opera, New York, New York
College of Physicians, Philadelphia Pennsylvania
Philadelphia Board of Education, Philadelphia Pennsylvania
Pennsylvania Treasury Department, Harrisburg, Pennsylvania