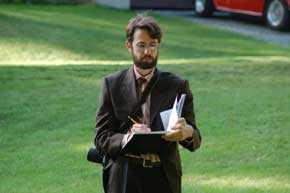 “Painting is slow in nature…There is a critical delay between a thought or sight and its translation into paint. It is in that delay, while the artist’s intention is channeled through the archaic technology of brush, pigment and oil, that interesting inaccuracies occur. There are the deviations from reality that express a personal subjective view. Then there are the deviations from intention that belong solely to the mysteries of paint.”
-Alex Cohen

The first-person perspective is a device that fascinates Cohen as a painter. When the perspective of the body suggests that the partially-viewed figure is the viewer himself, there is, in Cohen’s words, “a very real sense of being in the painting” because the viewer is able to imagine himself as an active participant in the depicted scene. Cohen’s earliest experiments with this device manifested themselves as paintings of his feet, but soon expanded into portrayals of foreshortened limbs and even whole-body depictions. In Cohen’s mind, first person perspective is liberating and empowering because it transforms a painting into an experience, rather than simply an image.

One of Cohen’s major sources of inspiration has been the striding figure of Johnnie Walker, the iconic symbol of Johnnie Walker Scotch whiskey. Clad in a red coat, black boots, and tawny loves, Walker appeals to Cohen because he engages notions of time and elevates “the functional act of walking to a performative level,” always appearing to be in a brisk, yet cheerful hurry. The Johnnie Walker icon has been an outlet for Cohen to consider the power of advertising and to reflect on Walker as a symbol of ambition and crusading self-improvement.

Another predominant source of inspiration for Cohen has been nature, with landscapes featuring prominently in his artistic repertoire. According to Cohen, landscape painting compels the artist to confront a pressing issue – namely, how to approach natural beauty and what response that beauty should evoke in the spectator. Landscape painting also asks the artist to tackle problems of belongingness and sense of self. As Cohen observes, “The sublime beauty of the wilderness is one that we at once desire to be a part of and fear that we could lose ourselves within.”

Cohen has exhibited at several Pennsylvania venues, including a 2009 solo exhibition at the Rodger LaPelle Galleries in Philadelphia. He was a featured artist in the 2010 Elephant's Eye Bucks County Artist Studio Tour.

Education and Training
George Washington University, Eliot School of International Affairs, 1999-2001
The Pennsylvania Academy of the Fine Arts, 2001-2006
The University of Pennsylvania, BFA, 2005-2008

Connection to Bucks County
Cohen was born in Newtown, Pennsylvania and has taught locally at the George School. He also exhibits at the Hrefna Jonsdottir Gallery in Lambertville, New Jersey and Riverbank Arts Gallery in Stockton, NJ.

Getting the Hang of It

The Spirit of St. Louis