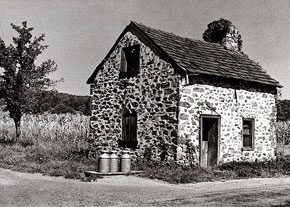 "Photography is a way of feeling, of touching, of loving. What you have caught on film is captured forever it remembers little things, long after you have forgotten everything."
-Aaron Siskind

Aaron Siskind (1903-1991) was an American photographer widely associated with the abstract expressionist movement as he worked towards photographic abstraction of surfaces and painterly gestures. In his biography, he wrote that he began his foray into photography when he received a camera for a wedding gift and began taking pictures on his honeymoon. He began his photography career in the 1930s with documentary work. His early work reveals an interest in formal composition. Siskind taught English in the New York public schools while working as a freelance professional photographer.

Siskind notably taught at Black Mountain College, which introduced him to numerous artists in other fields and pushed forward his interdisciplinary thinking. Early in his career, he was a member of the New York Photo League. Working with that group, Siskind produced several significant socially conscious series of images in the 1930s. Among them the Harlem Document remains the most famous.

In 1935, drawn by both the rural and artistic reputation of Bucks County, Siskind came to Bucks County to make a series of photographs of the architecture to illustrate a book on traditional American homes, Quaker meeting halls and schools. He collaborated with Charlotte Stryker, a Columbia student from Doylestown, on Colonial Architecture of Bucks County. His photographs for this volume were artful as well as excellent documentary work of vanishing architectural forms. The entirety of that body of work is held in the Mercer Museum, and the first exhibition of photography at the Michener was from this collection in 1989.

In the early 1940s, Siskind's work became more abstract and critics began to refer to him as an abstract expressionist photographer. His interest turned to close-ups of seaweed, rocks and torn posters. His photos differed from other pioneers of American photography because he focused on the detail provided by a close-up image of a subject. Siskind's work focuses on the details of nature and architecture. He presents them as flat surfaces to create a new image out of them, which, he claimed, stands independent of the original subject- making him one of the largest 20th century advocates for photography as an art form.

In 1950, Siskind met Harry Callahan when both were teaching at Black Mountain College in the summer. Later, Callahan persuaded Siskind to join him as part of the faculty of the Art Institute of Design in Chicago (founded by Lazlo Moholy-Nagy as the New Bauhaus), where he taught photography. In 1971, he followed Callahan (who had left in 1961) to teach for the rest of his life at the Rhode Island School of Design.

Aaron Siskind is a major figure in the history of American photography, and it is so crucial to be able to explore and celebrate that early body of work in Bucks County as he came into his own photographic voice.